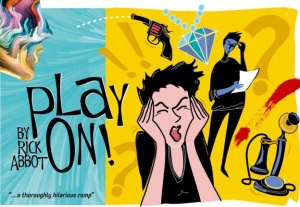 Director Jarrad West has an obvious affection for the script, and invests the play with manic energy from desperate last rehearsals through production week Hell to opening night catastrophe.

The cast jump at the chance to act as badly as they can, with mangled English accents, flailing limbs, and failing memories wrecking – or possibly improving – an already insipid murder mystery.

There’s a lot of fun to be had, but the script is starting to creak with age: the characters are broad parodies, and the sub plots that are introduced are either barely developed or abandoned in the rush to get to the next dropped line or forgotten prop.

From start to finish, the joke is that these are bad actors who don’t know their lines stuck with an awful and constantly changing script, and that disaster is inevitable. The first two acts in particular tread very similar ground, and conflating them – or even cutting one entirely – would have improved the show’s pacing.

The funniest moments come from Duncan Driver as the obnoxiously professional “good” actor who is word perfect during rehearsals but utterly crumples during opening night. Tony Turner also picks his moments effectively, his character’s gravitas and restraint making the inevitable gaffes more satisfying.

West’s take on the play is deliberately over-the-top, and the lack of restraint pays off with a hilarious finale. Audiences will laugh at how fate conspires against this unlucky troupe. Those who have worked in community theatre will smile with recognition, but also know that the truth is much weirder that the play lets on.