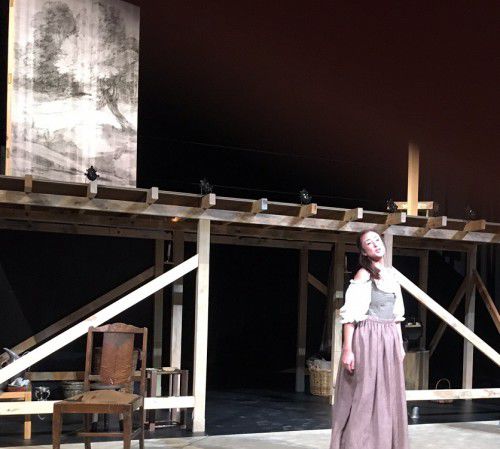 Local women shine in this perfectly realised and highly professional production of British dramatist April De Angela’s 1993 play, Playhouse Creatures. Set in 1669, it tells the story of five of the first actresses to take to the English stage, after a royal decree that men were no longer to play the roles of women.

The precarious lives of these actresses unfold as tragic but never turgid. The action is lively and comic but never trivial. Text from historical plays of the time, particularly Shakespeare’s Macbeth and Antony and Cleopatra is woven through the script to great effect.

Many of their challenges faced by the Playhouse Creatures are echoed in the lives of actresses today. In one particularly poignant scene the first leading lady, Mrs Betterton (Karen Vickery) announces her retirement from the theatre because she is too old to be of interest to audiences.

Her husband, who faces no such censure will continue to play opposite her successor, the 16 year old Nell Gwynn (Amy Dunham). Gwynn, renowned for her wit and beauty, rose from her humble beginnings as an orange seller to became a long term mistress of King Charles II.

Director, Jordan Best performs cello accompaniment on stage to great effect. Her mute presence is a reminder of centuries of women’s exclusion from musical limelight.

Liz Bradley as the oldest actress, Doll Common, provides a resonant background story that bookends the play. She recalls that The Playhouse was formerly a venue for performing bears. Her father, as the bear keeper, explained his extreme cruelty to a particular animal by saying, “When she dances, we eat meat.”

Pigeonhole Theatre is a new, local company dedicated to providing professional productions with great roles for women. In this show, their aim is fully realised.