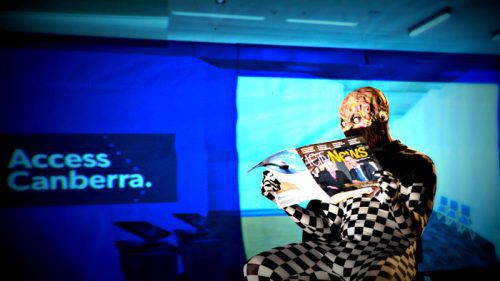 A FARCICAL, romantic comedy with metaphysical overtones, this show is fresh and funny. The setting is Canberra’s newest town centre, Gungahlin. Alan (Dean Kermond) and Missy (Clare Moss) meet in an Access Canberra shopfront, each embroiled in their own ongoing battle with bureaucracy.

The first half is thick with laugh-out-loud depictions of life in medium-density green fields developments. Gillian Schwab’s design incorporates images of iconic aspects of life in the new suburbs: cats in cages, flash new cars and kangaroos.

There is warmth, wry humour and compassion in the lively script which avoids taking cheap shots at outer suburban existence. It is the writer/director’s hope that, while firmly rooted in Gungahlin, the show “will speak to contemporary (Australian) life more broadly.” The story revolves firmly around local issues that could be experienced in any new area where apartments face fields and from which residents face long, daily commutes.

Alan enjoys a brief and hilarious moment in the local media spotlight as he campaigns for a new slip lane to reduce commuting times. A mysterious daemon has identified Gungahlin as the perfect site for an independent state of hell to rise. Alan makes a Faustian pact with the harlequin-like daemon that leads to political aspirations, lies and deceit.

Missy, a single mum of two, has daemons of her own. Each character’s back story makes the poignant point that this place that appears aspirational is a home to lives that just haven’t gone according to plan.

In the latter part of the show, farce and fantasy loom large and the plot becomes a little unclear. There are unanswered questions and Missy’s character, which was strong in the first half, needs further development. Nonetheless, comedy and action carry it to a successful climax.