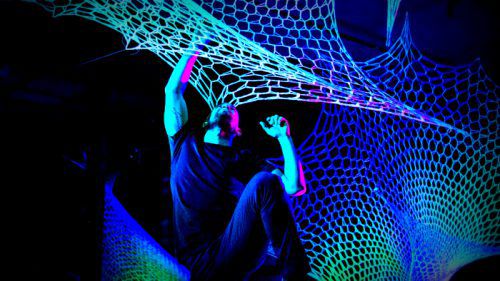 THERE was a “Wow” factor upon walking into the Nishi space for this performance. Past the wine bar, coloured lights and hung nets filled the performance and audience space. The setting was cabaret style with unreserved seats and bar tables. On the way through the Nishi building signs told us “Vote 1 Dance” and stickers for the “Australian Dance Party” were placed on tables and handed out, like marketing material, to be taken home. It set the scene nicely.

Unless it is part of the performance to mingle with or integrate the audience, readily seeing the performers, in costume, chatting with guests prior to the start of a show detracts from the impact when a show begins, as well as performers losing their allure. Perhaps here it can be put down to political campaigning?

The dancers are joined by a group of first-class musicians from the Canberra Symphony Orchestra along with ARIA-winning trumpet-player Miroslav Bukovsky. Most of the music has also been arranged by the performing musicians, with a great rendition of Jimi Hendrix’s “Voodoo Child” arranged by Dave Flynn.

The idea of “Strings Attached” is to explore and demonstrate that dance and movement is and always has been an innate response to music but also plays with the effect that movement and dance has in the creation of sound and how the dancers can inform the creation of music.

Tribal and indigenous dance, flamenco rhythms, Renaissance, circus-style music, Eastern European music are all briefly acknowledged. A Jazz trumpet piece cleverly merged into slow Indian drumming in a piece by Lea, as she effortlessly combined her well-known fascination for birds and bird-like dance, with her experience in Indian dance.

All four dancers in “Strings Attached” are very different stylistically, adding a timeless, global, genre-less quality to the performance, which was somewhat more abstract that just a linear summation of dance through the ages. An awkward, tango-style dance mimicked the ups and downs of relationships. This piece was well-choreographed for the most part, but just fell short in the execution and climax.

Proost demonstrated, poignantly, that a dance phrase, when performed in silence, changes completely when performed to music, taking on elements of fear, despair or joy.

Experimental dance or long, self-indulgent segments need to remain interesting for an audience. Whilst the demonstration of the flower power and free love generation’s tendency to be whipped into a frenzy by the music d’jour, was effective, the hair flinging and moshing could have been further developed. There were instances where the attention to detail such as hairstyles and underclothes was distracting and occasionally the limitations of the dancers’ flexibility was apparent, however, on the whole, these details did not detract from the overall performance.

Music has the power to punctuate or perpetrate movement, so aptly there was physical integration of the musicians and dancers. The musicians invariably yet endearingly come off looking awkward, in a literal demonstration of the attachment between musicians and the dancers as well as the connection between the artists and their chosen form of expression, culture and passion – their bodies or their musical instruments.

The performance drew to a close with a physical attachment between the dancers and musicians, with the former donning headphones and the latter leading the dancers, with various tunes, around the dance floor, until, being led by the Pied Piper of iPhones, the audience is also invited to join in.

This cocktail-feel, stylish, and thoroughly fun and enjoyable production allows a wealth of talent to merge and perform, in an interesting and suitable performance space. Vote with your feet and join the “Party”. You’ll want to.

The next production by ADP will be at Mount Stromlo, in November.