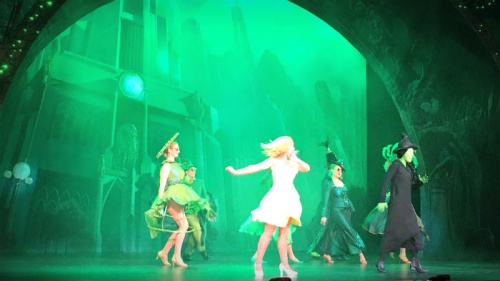 FREE-RAIN Theatre’s wondrous production of the Stephen Schwartz musical, “Wicked” is pure joy from beginning to end. Brilliantly directed by Shaun Rennie, the production works equally well as a thrilling theatrical spectacle, and as a moving telling of the story of an unusual friendship highlighting the acceptance of difference.

The story of “Wicked” focusses on the back-story of “The Wizard of Oz”, depicting the friendship between the two witches, Glinda and Elphaba, before they appear in that story.

Part of the fun is spotting the references to “The Wizard of Oz”. But even if you’ve never seen or read “The Wizard Oz” (Really!!), you won’t be left out.

Shaun Rennie’s direction is masterful. His clear focussing of the storyline, his imaginative staging of the crowd scenes, and the strong, confident performances he draws from his principals and ensemble, all evidence his attention to detail and firm grasp of the musical genre.

The production is visually beautiful with an exceptional set and eye-catching costumes, all stunningly lit by Phil Goodwin. The special effects are brilliantly achieved, especially Elphaba’s levitation during “Defying Gravity”.

Graceful, sweeping choreography, devised by Michelle Heine, and superbly executed by the dancers, cleverly showcases the spectacular costumes while complimenting the visual spectacle and highlighting the mood of the scenes.

Two outstanding performances provide the core of the show. Completely adorable, Laura Murphy gives a wonderfully comic performance as the ditsy blonde, Glinda, whose life lessons to Elphaba on how to be “Popular” are hilariously creative, and whose ultimate getting of wisdom is beautifully realised.

In the contrasting role of Elphaba, the green witch, Loren Hunter is equally impressive, skilfully maintaining sympathy for her character despite her aggressive approach to addressing her challenges. Both command the stage and possess superb singing voices, equally comfortable belting or singing sweetly. They also have the ability to phrase their songs so that the lyrics become conversations, especially evident in their demanding and moving duet “For Good” which brings the show to its climax.

Surrounding Murphy and Hunter is a fascinating menagerie of talented supporting characters, among them, the dashing Fiyero, handsome object of desire for both Glinda and Elphaba, stylishly portrayed by Drew Weston. Bronwyn Sullivan, resplendent in a succession of magnificent costumes, adds another of her impressive characterisation, as the not-so-nice Madame Morrible, and Steve Amosa, as The Wizard, tugs at the heartstrings with his beautifully sung “A Sentimental Man”.

Teya Duncan gives an appealing performance as Elphaba’s crippled sister, Nessarose, who has her heart broken by Alexander Clubb’s unhappy munchkin, Boq. Fraser Findlay intrigues as the tragic sheep, Dr Dillamond, who is cruelly deprived of his ability to speak, and David Santolin creates a sinister presence as the flying monkey, Chistery.

Stephen Schwartz score for “Wicked” is complex and demanding, but Ian McLean’s magnificent orchestra meets every challenge head-on, providing a thrillingly rich sound for the choral spectacle and the soaring solos, yet sympathetically subdued when providing underplay for the dialogue.

Anne Somes and her talented team at Free-Rain theatre have provided Canberra audiences with many outstanding productions, but perhaps none more impressive than this superb production of “Wicked”. Extra performances have already been added to the previously announced schedule, but you’d be wise not to hesitate if you want to experience this brilliant production.