THE Canberra Youth Orchestra, under the expert baton of Leonard Weiss, presented an evening of popular works by Dvo?ák, Tchaikovsky, Borodin and Sibelius. It was a varied program showcasing these four very different composers.

Three of Dvo?ák’s Slavonic Dances were played first and the orchestra was in fine form from the very first note, giving dynamic performances of the first and seventh dances and, in between, playing the less dramatic sixth dance with great feeling.

Next on the program was a performance of the second movement of Tchaikovsky’s Violin Concerto in D major, with soloist, Helena Popovic. 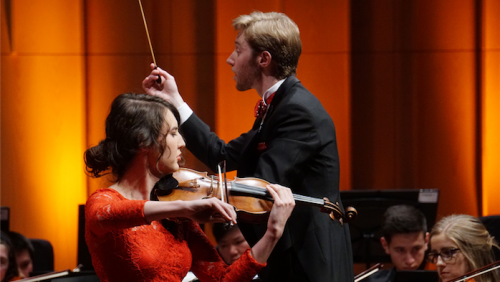 This popular work is also considered to be technically difficult to play but Popovic gave a beautiful performance bringing out the emotion of the work with great skill. There was also a fine balance between soloist and orchestra.

This was followed by Alexander Borodin’s Polovtsian Dances from "Prince Igor", a sensuous, atmospheric work with melodies that are now well-known, having been used in the musical "Kismet" in 1953. The orchestra gave a strong performance bringing much light and shade to the work and playing the dramatic passages especially well.

After interval, the orchestra played Sibelius’ Symphony No. 2. First performed in 1902, it was popularly dubbed the "Symphony of Independence", as it was written at a time of Russian sanctions on Finnish language and culture. The orchestra gave a particularly fine performance of this marvellous work especially in the lively third movement leading to the grand emotive final movement.

Weiss also announced an exciting program for the orchestra in 2017 with guest artists including Idea of North and James Morrison.