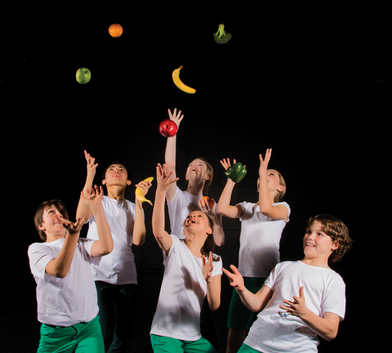 IT seems that the days of five food groups, three meals a day, hoovering down dinner assuming it was nutritionally balanced, filling and under the recommended daily intake, are long gone.

The QL2 dance ensemble has put together a performance considering where we eat, how we eat, who we eat with, where the food came from, how it was killed, the influence of advertising and media on our food choices and a bunch of things in between.

This energetic and up-tempo performance required the young dancers to learn lengthy passages of choreography and they all appeared up for the challenge. No set was used and with minimal props, the focus was solely on the dancers and choreography.

Jack Ziesing, a former Quantum Leaper, made a distinct and impressive choreographic addition to the company with “Food Chain” and “Man Machine”. The former dealt with the confronting issue of animal slaughter for food and compared it with death row. The piece was maturely approached and exceptionally well performed, with the expressive choreography showcasing some of the older dancers. The lighting, projected as a shaft across the stage, drew the hapless subjects to their inevitable end.

Ziesing’s second piece allowed the boys to burn off some energy with a poppy, bouncy soundtrack, like lemonade fizz or bubble gum. This piece allowed the audience to enjoy the personalities on stage, while taking a light-hearted look at food as fuel, although the theme was not readily identifiable in its depiction.

Jamie Winbank and Caitlin Comerford’s pieces were danced cohesively, exploring definitions of healthy eating and balanced diets, and the challenges of getting an old family recipe just right. The show opened with a piece by QL2 artistic director Ruth Osborne, where the dancers created an impressively speedy and solid pyramid, presumably the food pyramid, before they partook in some doughnut worship to disco-esque music.

It’s not easy to spend an hour depicting food through dance, and the many complex relationships we may have surrounding it. As such there was plenty of gesturing depicting the process of picking up, biting, chewing food and drinking. It was an age-appropriate tactic for some of the younger or less-experienced dancers. The dancers also took on mannerisms of animals – impatient for food, unable to self-regulate and able to muster only a grunt to upsize their meals.

Food addiction and eating disorders didn’t seem to be on the metaphorical menu until one of the final passages of dance looked set to portray this. Unsatisfyingly, it was cut short and would have been a worthy topic to explore.

There were many talented dancers in this group, from various dance disciplines, and there appeared to be a focus on mentoring – a more experienced dancer was sometimes paired with a younger one to give them extra confidence and adding a balance to parts of the performances regarding the dancers’ heights and experience.

This impressive young troupe have collaborated well with each other and their choreographers to present a youthful and energetic feast of fun and dance.

CityNews - January 25, 2021
0
As the climate changes and heatwaves become more frequent and severe, it’s vital we do more to understand who is most vulnerable and how we can reduce their risk, writes THOMAS LONGDEN, MATT BREARLEY and SIMON QUILTY.