A SMALL guarantee: this week’s “Seven Days” will contain no mention of the American President-elect.

Despite him, the week was punctuated with plucky pollies, especially the Greens recidivist MLA Caroline Le Couteur, returning to the Assembly as the recycled member for Murrumbidgee. She bravely went where her leader and cabinet member Shane Rattenbury seemed unprepared to tread during the last Assembly and has loudly announced she will refer an ACT government decision on the waiving of money and taxes during the sale of the Brumbies’ Griffith headquarters to the territory’s integrity commission. Brave, save for the fact we don’t have a corruption watchdog yet, just the pre-election promise of one. I heard that sigh!

THEN there was growling Gai Brodtmann, who took the Russians to task when two of its diplomats shamelessly tried bullying a young female motorist last month after one of them drove a dipo-plated car into hers in a Manuka shopping centre.

The member for Canberra upped the intimidation, forcing the Russian driver to agree to apologise (and sort out the repairs).

“For Canberra residents to be physically intimidated by diplomats hiding behind immunity is inexcusable,” the Labor MP said. “Diplomatic immunity is not licence to intimidate and threaten members of the community.” Go, Gai!

COURAGEOUS, too, is Queanbeyan boy and local NSW National Party member John Barilaro taking on the Deputy Premiership in Mike Baird’s highly unpopular State government. Within 24 hours, the good news turned to custard when affable “Bara” was bowled a curly question from Labor accusing him of accepting illegal political donations for three years from his wife, who the Opposition says is a property developer. He floundered in Question Time, but the Nats said later they’d looked at it and all was okay. Okay?
SAD news that the Australian Railway Historical Society’s railway museum at Kingston is running out of financial steam and will close. Subject to the possibility of help from the ACT government, it with be either for the short term or forever.

President David Sommerville says: “The closure of the museum will see some beautiful old carriages sold to pay off debt, some removed from Canberra to other heritage groups interstate and some may even be scrapped with parts of Canberra’s heritage gone forever.”

THE ACT Budget and the risks of its persistent deficits returned to the spotlight after having been masterfully muted during the election campaign. Industry Super Australia chief economist Stephen Anthony said the ACT should tread carefully through what could be a difficult global economic environment, given the risks of its big reliance on the public sector.

“If the government isn’t exercising the requisite control over spending and doing everything in its power to maintain competitive growth drivers in the economy, then it is much easier to get in a very tough situation quickly,” he chided.

PRIMARY school teacher Brigitta van Reesch (now Brigitta van Deas) invited all her grade one students at Holy Trinity Primary School in Curtin to her wedding, straight after school, of course, at the Holy Family Church in Gowrie. “They are part of my life so I wanted to share the day with them,” she sweetly said.

LIKEABLE Craig Allen, who has been filling in since Virginia Haussegger resigned from the ABC’s local, nightly news bulletin last month, has been overlooked for the multi-talented Dan Bourchier. The former Sky reporter will not only read the 7pm TV news Monday-Thursday, but also host breakfast on ABC 666. Craig mops up with the Friday-Sunday bulletins.

AND giving away his job in the public service after almost 40 years, we say goodbye to the remarkable Nic Manikis, who has retired. His achievements in multicultural affairs are credited with changing the face of Canberra, especially his shepherding of the wildly popular National Multicultural Festival. Well done, Nic. 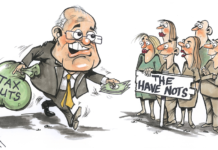