THE 16-year-old Labor government has gone into election mode panting with promises and wheezing under the weight of its pork barrelling with a sudden $650 million hospital redevelopment and a second-stage tram line mirage to Woden, but all beyond the next term of government.

Which means anyone craving a new hospital, and don’t we all, from the Barr government will need to be cheerfully voting for a 24-year Labor government in 2020.

Unfazed at being gazumped, the Libs leader Jeremy Hanson is steadfast on building ASAP the $395 million hospital (let alone his two north-south mini-hospitals) Labor promised us at the last election, funded from the deposit for the tram the Liberals won’t be building.

Hanson said: “ACT Labor has released a completely cynical furphy on health, pretending to support a system that it has left struggling for years. Just days ago ACT Labor dismissed any need to rebuild the Canberra Hospital.”

They did, too. There must be some voter research spooking the Labor campaign bunker.

SURPRISINGLY, unattracted by the phallic nature of the Telstra Tower, the publicity deprived Sex Party candidates in the upcoming ACT election posed hilariously po-faced in front of the offending erection calling it “ugly”, an “awful eyesore” and a “complete embarrassment”. They want the 26-year-old Canberra landmark demolished or transformed.

NOTHING like a jailbreak during an election campaign to stir the law-and-order possum and, as if on cue, a couple of remandees managed to end the Alexander Maconochie Centre’s unblemished record of no escapes since it opened in 2009.

It took a week to get the second guy, but the glum-looking, history making  inmates were recaptured, but not before Corrections Minister Shane Rattenbury had dragged out what former Chief Minister Jon Stanhope wickedly describes as the “well-worn wet lettuce leaf” and promised a full internal review into the incident. 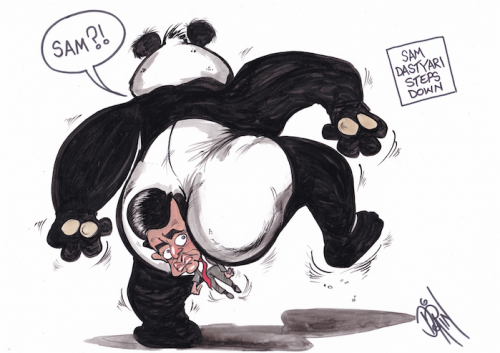 While wider Australia ponders the only question Dastyari didn’t answer – why did he let a Chinese-Australian donor pay for an overspend in his travel allowance? – the government taunted Shorten for not sacking the NSW senator, with the PM guffawing that Dastyari had to sack himself.

THE otherwise rampaging Raiders have dropped the ball after four years of community biffo, deciding to wind back its Braddon plans for 156 apartments, offices and shops on Donaldson and Torres Street, overlooking the rugby league park.

Sensing an impending glut of apartments in the inner-north, CEO Simon Hawkins said the market had changed, the original $80 million proposal no longer stacked up and the club was now aiming for a “pretty prestigious type of townhouse” on the site. The new plan calls for 94 apartments and 48 townhouses – which is only 14 fewer than the original concept.

MYSTERY most certainly surrounds spy author Frederick Forsyth’s sudden disappearance from Goulburn’s plucky annual SPYfest. “Due to an unforeseen event that has prohibited him from travelling,” was the only clue we had to discovering the real reason for the headlining British author’s shock absence.

EMINENTLY sensible paediatrician and former Canberra Citizen of the Year Dr Sue Packer bemoaned to a local conference on raising children in the 21st century that parents were so spooked by the spectre of the roving paedophile that they wouldn’t give their child freedom to explore even their own neighbourhood.

“Kids are sexually abused by people they know. If they’re not family members, they’re trusted family friends. And yet we’ve totally reversed the society norms with these ogre paedophiles who mostly don’t exist,” she said.

AND as Malcolm Turnbull approaches his first year as PM, political commentator and Tony Abbott’s former chief of staff Peta Credlin was hard-pressed to name a single policy achievement of the Turnbull government in that time. In a Sky News interview Ms Credlin appeared stumped by the question and, after a couple of seconds, could offer up only: “Well, by the skin of his teeth he didn’t lose to Bill Shorten”.

Columnist Robert Macklin is on leave.

Are you more likely to be bitten by a mosquito?

CityNews - February 13, 2020
0
Feel like you're a mozzie magnet? It's true – mosquitoes prefer to bite some people over others, writes CAMERON WEBB.