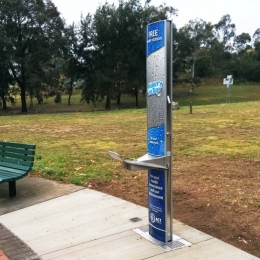 “Since 2014, the ACT Government has progressively installed 30 ‘Water on Tap’ refill stations in parks and public places across Canberra in an effort to reduce the use of disposable bottles and increase fresh, tap water consumption,” Meegan said.

Meegan has invited the community to have their say on the location of any future water refill stations by completing a short survey.

The water refill stations are part of the ACT Labor-Greens Parliamentary Agreement. Portable units are also available for hire from ACT Health at no cost for use at events. Contact 6269 1000 during business hours to arrange bookings.