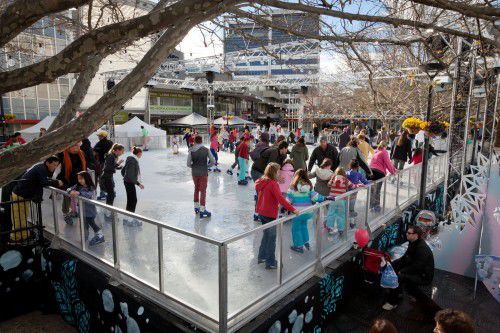 IN the City Canberra CEO Jane Easthope has announced that “Skate in the City” is to become “Winter Festival”, a part of a national event to be held over 3 weeks during June and July this year.

It will be styled on European winter markets and will be held in iconic locations in Brisbane, Sydney, Canberra and Perth.

“For many Australians this will be their first experience of ice and snow” said event organizer Andrew Lemon.

“For others it will be a chance for them to re-live some of the fun snow and ski experiences they’ve had on holidays – but without the huge price or needing to pack or travel!

“Imagine ice skating on an open air rink with powder snow dusting your hair – blink and you’ll feel like you’re in Austria not Australia.

“With the warm climate in Australia ice skating is obviously not something that most people do all the time, but it’s awesome to try new things and this festival is loads of fun, even if you’re a bit wobbly at first. It’s not that difficult really and we have professionals on hand to assist novice skaters, plus of course there are lots of other fun activities to do.

Jane is thrilled that this major national event is coming to Canberra.

“The addition of Canberra to the Winter Festival line up is a key achievement for the city and our surrounding region,” Jane said.

“Taking the much loved Skate in the City to a new level, Winter Festival in the City will include an ice rink and two new exciting rides including the real snow Toboggan Terror and the Giant Inflatable Ice slide. European style market stalls and a wealth of exciting entertainment options will ensure a fantastic time for all the family.”

Andrew Mathieson - March 2, 2021
0
A builder has been forced to cough up $400,000 to the ACT government to avoid ongoing litigation that could further delay the reopening of a public pool.