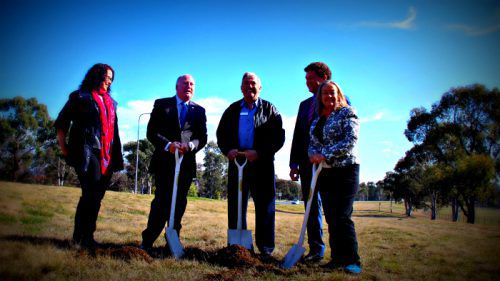 MEEGAN Fitzharris says the first sod has been turned on the $28.1 million duplication of Ashley Drive between Erindale Drive and Johnson Drive.

“The duplication of Ashley Drive will ease congestion and help save commuters time every day,” Meegan said.

“It will also improve the experience for cyclists and pedestrians and make the road safer and easier to use for everyone.

“The ACT Government is committed to easing congestion across Canberra and keeping Canberrans moving, whether it’s on our road network or through integrated transport services, including better buses, light rail and more walking and cycling choices for Canberrans. Canberrans want to move easily, quickly and comfortably around Canberra and that is exactly what the government is delivering.

“The upgrade will significantly increase the capacity of the road and improve access for Theodore, Calwell and Lanyon residents connecting to the northern areas of the Tuggeranong Valley and Woden Valley through to the city centre.

“A three kilometre section of Ashley Drive between Erindale Drive and Johnson Drive will be duplicated to a dual carriageway with improvements made to the Statton Street, Bugden Avenue, Clift Crescent, Ellerston Avenue and Johnson Drive intersections. A new carriageway will be constructed on the eastern side of the existing road and the north and southbound carriageways will have two 3.5 metre lanes and a two metre on-road cycle lane.

“These improvements will accommodate the high levels of traffic in the area and address the excessive delays experienced during peak periods, particularly where Ashley Drive intersects with Statton Street, Clive Steele Avenue and Bugden Avenue.

“I’d also like to particularly acknowledge previous Minister for Roads and local MLA Mick Gentleman and local MLA Joy Burch for their strong advocacy for this project, which they know is important to the people of Tuggeranong.”

Minister Fitzharris said the project not only duplicates Ashley Drive between Erindale Drive and Johnson Drive, but also provides additional features such as the pedestrian bridge and an extended noise wall, which were requested by the community as part of a consultation in late 2014.

“The noise wall along the eastern side of the corridor between Statton Street and Isabella Drive has been constructed to help mitigate noise during construction and traffic noise when the upgraded road is operational.

Andrew Mathieson - February 26, 2021
0
GWS Giants are in the midst of negotiating with the ACT government to maintain their presence in Canberra for possibly a further 10 years.