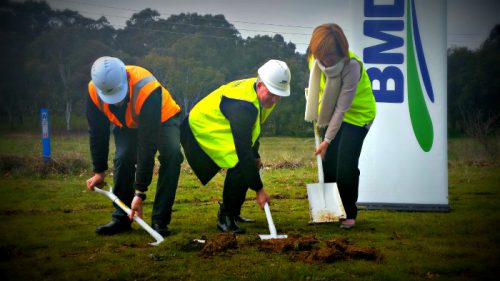 “The first sod was turned today on this important infrastructure project to improve traffic management as the population of Belconnen and Gungahlin continues to grow,” Meegan said.

“This project also supports access to the University of Canberra Public Hospital, which is due to open in 2018.

“I’m pleased to announce that works are getting underway as construction contractor BMD Constructions has been awarded the contract for the project and is already progressing the set up of the site and preparatory works.

“Major construction works will start next month to duplicate this one kilometre section of Aikman Drive, which will include on road cycle lanes and a shared path on Aikman Drive from Ginninderra Drive to Emu Bank, along the University of Canberra campus boundary.

“A new shared path will also be delivered along Ginninderra Drive from Aikman Drive to Allawoona Street. The new path will provide a landscaped walking and cycling route between the new hospital and the Belconnen Town Centre. These new paths will greatly improve access for pedestrians and cyclists using the area.

“The project will also include a new internal road connection from the hospital roundabout to Pantowora Street, which will support bus services to and from the University’s new medical facility.

“Improvements at the Joy Cummings Place and Aikman Drive intersections will also be made to provide improved access to the Kangara Waters Retirement Village. This will include two new signalised pedestrian crossings.

“Aikman Drive is a major arterial road in Belconnen that carries around 15,000 vehicles per day and this upgrade will improve the capacity of this important entry point to the Belconnen Town Centre.

“Construction is expected to be completed in late 2017 and will be well timed with the opening of the new hospital, as well as further development in Lawson,” Minister Fitzharris concluded.