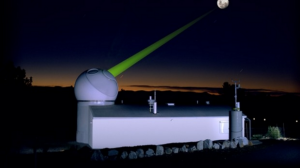 CLOSE to 100 of the world’s top space environment researchers will this week congregate on Mount Stromlo to discuss ways to clean up the masses of space debris currently orbiting earth; the same debris that recently cracked a window of the International Space Station.

The Space Environment Research Centre’s (SERC) International Research Colloquium, to be held from 31 May – 1 June, is the premier event of the year for the Canberra-based international research organisation.

“More than AUD$1 trillion worth of global space infrastructure is currently at risk from an ever increasing amount of space debris,” Ben said.

“Globally, space infrastructure delivers essential and highly efficient services including communications, navigation, resource management and climate change monitoring. This infrastructure is at risk from space debris ranging in size from spent rocket stages as large as busses, to flakes of paint measuring millimetres. This debris can travel at speeds in excess of 20,000km/h, so even a single flake of paint can badly damage or destroy a vital piece of space infrastructure. The dangers of space debris were highlighted earlier this month when the International Space Station’s Cupola window was badly damaged by a minuscule piece of debris thought to be a paint flake.

“International collaboration is essential for a global problem such as space debris.

“There are estimates of more than 300,000 items of debris orbiting the earth greater than 10cm. There is so much debris that it is colliding with itself, and creating more debris. A catastrophic avalanche of collisions which could quickly destroy all orbiting satellites is now possible.

“Our initial aim is to reduce the rate of debris proliferation caused by new collisions, and then to remove debris using ground-based lasers. There have been strenuous efforts in many countries over the past decade to develop space debris mitigation technology. SERC brings together leading debris mitigation programs from around the world to create a team with the required critical mass of researchers, technology, funding and equipment. The resource commitments for SERC have come from every tier of space activity and are an indication of the international importance of this initiative.”

CityNews - February 26, 2020
0
Days out from the beginning of the Enlighten Festival master photographer ANDREW CAMPBELL sneaks some photos at a light rehearsal last night (February 25).