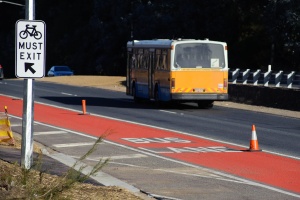 Meegan is flagging new services to Weston Creek and the Molonglo Valley, Crace, Florey and Latham, and the extension of Blue Rapid 300 services to Kippax.

“The ACT Government is committed to improving public transport, no matter where you live. The new bus timetable features a range of changes people have asked for, including new routes and extended services, to make bus travel more convenient, quick and reliable,” Meegan said.

“A key feature of the timetable will be significantly improved services for the residents of Weston Creek and the rapidly growing Molonglo region. This will include the introduction of the Weston Line – an all day service linking Woden, Cooleman Court and Civic via the Cotter Road, an all day service going via the North Weston Park & Ride/Bike & Ride, as well new services into Coombs.”

Some of the improvements include:

Meegan said there will also be minor changes to school services, which schools and parents will be notified about.

“The early announcement of the new timetable will give Canberrans the chance to find out more information and prepare for the changes. Schools are also being contacted today.

“The finalisation of this timetable is the result of a significant amount of work from our Transport Canberra planners who have analysed data available from the MyWay and NXTBUS systems. We want to improve public transport and encourage more people to use it, and we think these changes will make bus travel a really attractive option for many people.

“I am confident the new bus timetable will continue to see patronage growth for public transport, which saw an extra 200,000 boardings in 2015-16.

“The ACT Government is committed to improving public transport, and introducing new services that people want. We recently introduced a new free City Loop, which is already proving a success with Canberrans,” said Minister Fitzharris.

For more information, including routes, timetables and maps, visit transport.act.gov.au or call the Transport Canberra Information Line on 13 17 10.

UPDATE: The Liberals’ Alistair Coe is very excited by these changes:

Today’s ACTION bus timetable changes reflect a government which is playing catch-up when it comes to buses in Canberra. The changes are also working against the government’s own light rail plans, Shadow Minister for Transport Alistair Coe said today.

“Today’s changes highlight that Canberrans do not want to interchange or transfer between buses or other modes of transport, such as light rail. The government’s plans to cut back peak hour stand-alone services travelling the light rail route, and instead have buses that travel from Gungahlin suburbs all the way to city (without interchanging) shows that passengers want a single bus to go from their suburb to their destination,” Mr Coe said.

“If ACT Labor believed in its light rail plan, it would force Gungahlin residents to shuttle to Gungahlin Town Centre and then hop on to a City Bus, but they know it would be unpopular.

“The Barr government has also implemented a number of other services that were promised by the Canberra Liberals earlier in the year. However, there are many initiatives from the Liberals’ plan which the government is yet to adopt.

“Whilst more analysis needs to be done on the frequency of the proposed network, once again, the government is promising a second-rate public transport service for Canberra,” concluded Mr Coe.

Danielle Nohra - April 13, 2021
0
Belconnen Bowling Club will be able to open its kitchen for the first time in more than three years after being allocated ACT government funding today (April 13).