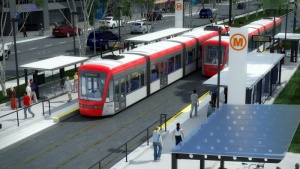 ANDREW Barr says Woden to the City via the Parliamentary Triangle has been selected as the preferred route for the next stage of a Canberra’s city?wide light rail network, connecting the north and south of Canberra, linking employment and cultural hubs and creating a public transport spine from Gungahlin to Woden.

“This Cabinet decision follows extensive community consultation on the priority corridors for the next stage of light rail and preliminary investigations by the ACT Government,” Andrew said.

“Making Woden to the City via the Parliamentary Triangle the next stage of the light rail gives us a north-south spine for our public transport network, which rapid and local buses will feed into and from which we can extend into the next priority stages of the core light rail network: Belconnen, the Airport and further into the Parliamentary Triangle.

“It will also continue the renewal of Woden, which is already being led by relocating more than 1000 ACT Government employees into the town centre.”

Meegan Fitzharris said connecting light rail all the way from Gungahlin to Woden would be a city-building project and would alleviate congestion across the north and south of Canberra.

“We have always said light rail would be a city-wide public transport project,” Meegan said.

“Now that the first stage of light rail, from Gungahlin to the City, is under construction, we can consider where it will go next.

“We’ve consulted with the community, and with almost 210,000 Canberrans projected to live, work or study within one kilometre of the Woden corridor by 2041, it makes sense to extend light rail over the lake, through the Parliamentary Triangle and into the bustling Woden town centre.”

Shane Rattenbury said the other priority corridors identified through community consultation were to Belconnen, the Airport and further into the Parliamentary Triangle. These will form the next stages of the city?wide light rail network.

For more information on light rail and public transport in Canberra visit transport.act.gov.au or call 13 22 81.

The Liberals’ Alistair Coe is not impressed:

The light rail extension announced today by Andrew Barr is further proof that he and the rest of the ACT Labor government are out of touch with the priorities of Canberrans. Just like the current proposed route from Gungahlin to the City, this extension to Woden is the wrong direction for Canberra on so many fronts and will continue to drive rates through the roof, Shadow Minister for Transport Alistair Coe said today.

“The extension is completely uncosted. Given Canberrans will have to pay $1.78 billion for stage one if ACT Labor is elected, this extension will further push the ACT into dangerous, unchartered financial waters. On a stroke of the pen by Andrew Barr, light rail costs could blow out by billions of dollars and residents will foot the bill,” Mr Coe said.

“There are several other major issues with the back of the envelope route from the City to Woden. We know there will be significant problems getting a tram over Commonwealth Avenue Bridge which is likely to blow out costs. Secondly, like the initial stage, very few people will live within walking distance of Stage 2.

“Buses that already service the route between the City and Woden are likely to be cancelled, meaning commuters will be forced to take a slower and less efficient journey on a tram.

“These are all common issues with the first stage of light rail and if the government disputes these issues for this second stage, where is the business case to prove otherwise?

“The fact is, Andrew Barr and Shane Rattenbury are addicted to light rail at any cost and will continue to gouge Canberrans higher rates to pay for this second stage if elected,” Mr Coe concluded.

CityNews - May 26, 2020
0
The ACT will see a wide-ranging easing of restrictions – including hospitality limits, gyms and beauty parlours – in time for the long-weekend, with further easing, including opening cinemas, from June 19.