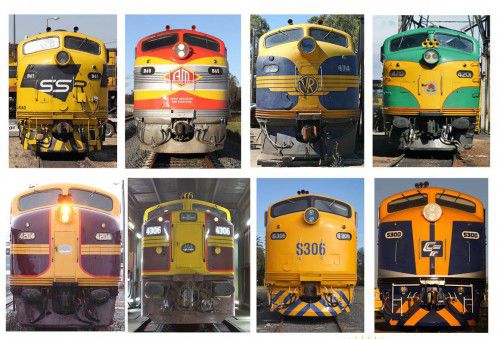 TRAIN buffs are being encouraged to book accommodation early for Streamliners 2016, which is coming to Goulburn on 1-3 October.

The event, which celebrates 65 years of streamlined diesel locomotives in Australia, will be a “huge October long weekend,” said organiser Bernie Baker.

“Quite a few places are booked out already and more are going fast. Rail fans are expected from all around Australia, and also internationally.

Bernie first started thinking about hosting a Streamliners celebration in 2000 but for various reasons never went ahead. Then in 2014, after taking a trip to the USA to attend a similar event in North Carolina, his idea was kick-started again.

“North Carolina was brilliant and I came home with a couple of ideas plus a few additions. Like many, I’ve developed a passion for these old diesels. I can’t stay away from them and I don’t think I’m alone,” Bernie said.

“It’s time to get the classics together while we still can.”

Streamlined locomotives began to appear in USA in the 1930s when operators were seeking that were more efficient locomotives than steam. New trains powered by revolutionary diesel engines and some were called the ‘streamliners’ for their smooth, sleek looks.

The speed, economy and efficiency of the streamliners proved to be an asset to the United States during World War II, carrying 90% of defence freight and 97% of troops.

Standard American locomotives were too heavy for Australian tracks, so operators began to build streamliners here. The first was South Australian Railways in September 1951, followed by Clyde Engineering who negotiated with American company General Motors Electro-Motive Division (EMD) to build them for the Commonwealth Railways. Goodwin would soon follow in partnership with the American Locomotive Company (ALCo).

The new locomotives quickly proved their superiority to steam and they operated both heavy freight and passenger services and they required less maintenance.

More than twenty locomotives in different colour schemes will be on display at the Goulburn Rail Preservation Centre on Braidwood Road. Additional activities planned for the weekend include BBQs, fog and laser light shows, and a fireworks display. For more information, see streamliners2016.com

Nick Overall - January 20, 2021
0
THE Eastern Brown Snake is one of the most feared creatures in Australian wildlife. It can grow to 2.5 metres and strike at a metre a second. And Gavin Smith can't get enough of them.