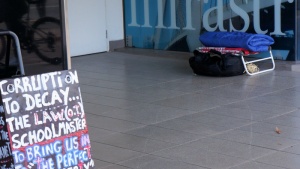 THE St Vincent de Paul Society Canberra/Goulburn is calling upon all candidates for the upcoming ACT election to commit to the amendment of the Human Rights Act 2004 to include the right to adequate housing.

“In 2012 the current ACT government committed to amending the Human Rights Act to including the right to housing; however that promise was quietly abandoned in 2014,” said Kym Duggan, Chair of the St Vincent de Paul Society Canberra/Goulburn Social Justice Committee.

“We strongly support the concept of Housing First. This policy principle recognises that provision of appropriate housing is the essential platform on which broader responses to a range of complex needs can be built. It is a direct consequence of recognising that access to housing is an essential human right.

“Currently the Act highlights that education is a human right, however how is anyone meant to succeed in education without a roof over their head?

“The average waiting time for social housing in the ACT is two years, with a much longer wait for those not considered ‘high needs’. Vinnies highlighted the need to address the lack of available and affordable housing in a 2012 paper, Housing Stress in Canberra/Goulburn, and more recently, in The Ache for Home published in 2016.

“Making this amendment would show the ACT as a national leader in the recognition of fundamental human rights in much the same way as the original enactment of the Human Rights Act did in 2004.

“The proposed change would recognise adequate housing as a basic and fundamental right for all.

“Candidates and the community can show their support for the change by tweeting #rightohousing .”

CityNews - February 19, 2020
0
UPDATE/ 7PM: Police this evening reported that the 15-month-old child had been located safe and well. The vehicle had been found and the man was assisting police.