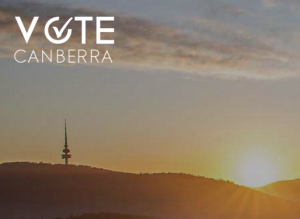 ACT Electoral Commissioner Phillip Green says VoteCanberra has officially been entered on the register of political parties in the ACT and is now eligible to nominate candidates for the 15 October 2016 ACT Legislative Assembly election.

“Parties wishing to register for ACT elections must submit a list of at least 100 members and a copy of the party’s constitution to the Electoral Commissioner,” Phil said.

“Registered political parties are able to list their party name or their abbreviated name on ballot papers and receive public funding of election expenses.

“Party registration applications for ‘Like Canberra’, ‘Sustainable Australia (ACT)’ and the ‘Animal Justice Party’ have also recently been lodged with the Electoral Commission and are currently within the period for public objection.

“Any political parties not yet registered for the October 2016 ACT election have until this Thursday, 30 June to submit an application for official registration to the ACT Electoral Commissioner.

There are currently seven political parties registered to contest the October 2016 election:

Further information on party registration can be viewed on the Commission’s website at elections.act.gov.au

CityNews - June 2, 2020
0
There are two kinds of people in Canberra; those who work and pay taxes and those who don’t, says letter writer LUCINDA SPIER, of Campbell.