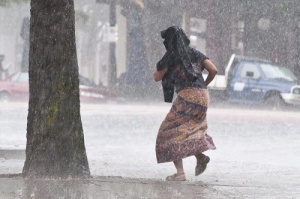 THE Bureau of Meteorology reports that Canberra had its third-wettest winter on record during 2016, with more rain days than average and an East Coast Low which caused record rainfall in early June.

“Temperatures were warmer than average, particularly overnight during June and July, but a cold front caused some snow to settle on July 13,” a spokesperson said.

“Canberra Airport recorded double its average rainfall during winter, the third-wettest winter on record (behind 1998 and 1991)

“June was the wettest on record for Canberra, with some stations including Canberra Airport recording their wettest winter day on record during an East Coast Low on 6 June

“Rain fell on 48 days, the fourth-highest number on record for winter and the most rain days since winter 1956

“Minimum temperatures were 1.5 °C above average, the equal fifth-warmest winter nights on record and the warmest since 2009

“26 nights were 5 °C or warmer, the equal third-highest number on record (average is 14 nights), with two nights exceeding 10 °C

“Maximum temperatures were also warmer than average, the equal eighth-warmest on record

“The winter mean temperature was consequently 1.3 °C above average, the third-warmest winter on record behind 2013 and 2009”