ONE OF the heavy lifters at the 2016 Canberra Writers’ Festival, is Australian novelist Isobelle Carmody.

On Friday she held a group of writers captive in a sold-out workshop called “Engaging the Fantastic” at the Museum of Australian Democracy. On Saturday, around the corner at National Library, she ‘conversed’ with Canberra novelist Kaaron Warren who, like Carmody, refuses to be pigeonholed as a genre-writer.

In Carmody’s case that genre is of course Fantasy.

Generations of young and not-so-young Australians have lived through the tribulations of the ‘far seeker’ heroine, Elspeth Gordie, in Carmody’s eight-book “Obernewtyn Chronicles” and have their own views on how this post-apocalyptic tale might end.

Now they know, for in the recently-published finale, “The Red Queen”, Carmody has now completed the story. Oddly enough, she says: “Nobody has written to say, ‘I don’t like where it’s ended’.”

But it’s not over. She has signed a contract with Penguin to write three books telling the “before-time story” as she says to Elspeth’s tale. She’ll take her over it as she famously has with previous books. “A novelist gains nothing thing by being rushed,” she says. “People stop reading you if you don’t give them the best you can…in the end, they’ll wait.”

A true believer in her art form, she considers it a labour of love to attend festivals like this and others around the country. It’s also a pleasure for her to meet people whose lives have been so affected by “The Obernewtyn Chronicles”, a tale she began writing at age 14.

Carmody is delighted to find that this writer, like many Australian parents, was introduced to her work by a pre-teenage child who would read great slabs of the “Chronicles” out loud before bed. 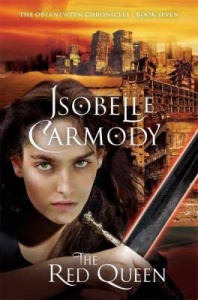 “I just love that,” she says. Her own sophisticated, 18-year-old daughter always gave her mother books when she was a child and enjoyed one of the great benefits of having a writer mum, even now asking Carmody to read to her.

“Books and people, that’s a special thing”, she says, “but books and kids – that’s a real bond.”

So what was it that impelled her to disappear into the world of Elspeth as a teenager? Simple, Carmody says: “I was the oldest of eight kids, there was no privacy, so writing was a way of getting some peace… When you write, time opens like a flower.”

But didn’t the other kids think she was weird?

“Yes, absolutely they did,” she says. There was no shortage of bullies in her childhood and although by now she’s had ample revenge on them through her fiction, as a child the only really good place of refuge was the school library – “librarians have a soft spot for people like me.”

Whether you’re young or old as a writer doesn’t matter, she believes. “When you write, age barriers fall away, it’s timeless.”

At 58, Carmody “can’t imagine stopping writing in the foreseeable future”, but she is trying a very different kind of writing, and has enrolled in a PhD at the University of Queensland. Really? Shouldn’t she be supervising PhDs in writing?

“Well, maybe, but I like to have a conversation outside my book,” she says, “I wanted to study literature… right now I’m reading Virginia Woolf’s essays…just because you’re a science fiction or fantasy writer it doesn’t mean you’re unsophisticated.”
The easy bit is writing a new story as part of the doctorate; the tough part will be writing the compulsory “exegetical essay” of 30,000 words in which she must analyse aspects of her craft.

Fans need not worry that it will ruin her writing. She and fellow novelist Nick Earls (he’s doing a Ph.D. at UQ, too) have been at it for long enough to be proof against turning stuffy and professorial.

“We’re not likely to be affected,” Carmody confirms.