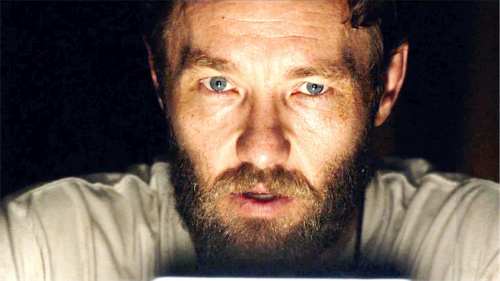 FOR his second feature, writer/director Trey Edward Shults sets an ensemble cast to confront a mysterious malign influence that makes a family wear gas masks outside their family forest home and repel all who intrude on their protective isolation.

It’s been billed as a horror film. But its story is not so much horror as horrid, with tensions and conflicts building slowly to a denouement that takes little resolution from what has preceded it.

Australian actor Joel Edgerton plays Paul, living with Afro-American wife Sarah (Carmen Ejogo) and adolescent son Travis (Kelvin Harrison Jr). The film begins with Paul euthanising his father and incinerating the body. A stranger arrives and is made unwelcome. He spends the night tied to a tree with a sack over his head and a gag in his mouth. Next day, Paul and Travis free him and learn that he is desperate to find uncontaminated water.

Paul and Sarah bring Will (Christopher Abbott) and his wife and child to their house under strict conditions that Paul spells out. In time, Will decides to take his family back to where they previously lived, setting in motion a turmoil that grows into a disaster.

Anxieties within Travis’s persona and conflicts with his father form a significant part of the film. Travis has nightmares in which he contracts the sickness.

While engaging enough in a minor way, the film asks questions without answering them, thus detracting from its impact and asking us to set aside the breaches of credibility caused by lapses in its logistic values. But compared with other examples in its genre, it holds its own well enough.

CityNews - May 29, 2020
0
No virus news is good news, as ACT Health says it will no longer announce daily virus updates unless there are developments.