EDITOR Chris Aulich has pulled together an outstanding team in his book “From Abbott to Turnbull: A New Direction?”.

It provide a series of different perceptions around policy, machinations, personalities, styles, influences, leadership and public engagement supported by f 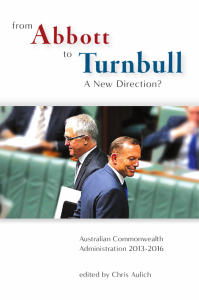 Michelle Grattan assesses the revolving prime ministership as “the high level of churn reinforces the already high level of public cynicism”. This is just one of many insights in the book regarding the impacts of political actions which are “bad for the political system”. This is the twelfth volume in the Australian Commonwealth Administration Series produced for the Institute of Governance and Policy and the University of Canberra.

Operation Sovereign Borders, health and education policies, the economy, foreign relations and the environment are amongst the policy issues examined. Providing grist to the mill are the contrasting personalities and approaches of the conservative Tony Abbott compared to the much more moderate Malcolm Turnbull. The chapters provide fascinating perceptions of this volatile time of capriciousness and political intrigue.

Editor Aulich calls for a “fourth branch” of the democratic process to sit alongside the legislature, the executive and the courts. He suggests this to restore integrity in politics with a description of how both the Abbott and Turnbull governments have undermined oversight and integrity. These are critical in combatting cynicism in politics and maintaining faith in government and the democracy. His fourth “integrity” branch includes the Ombudsman, Auditor-General, Human Rights Commissioner, Electoral Commissioner and the Parliamentary Budget Office, which he sees as being protected through parliamentary oversight and funding.

The fiasco of Abbott and Turnbull climate policy is highlighted where collectively, “state renewable energy targets will deliver twice as much as Australia’s national target”. It also provides an insight into the relationships with the other jurisdictions under both these prime ministers. Similarly, John Butcher analyses health and social policy in the Hockey “age of entitlement” and the “fiscal discipline” under Abbott. He also considers the failure of Turnbull to devolve hospital expenditure (and taxation) to states and territories as well as caving in to the “Mediscare” campaign when conceding to protect “every element” or “every aspect” of Medicare.

The prime ministerial transition is examined to include “Abbott’s appetite of alarmist posturing” such as “the ‘death cult’ of IS” and how it “alienated and insulted Muslim communities”.

In contrast, Turnbull’s foreign policy approach noted that “the world did not need an American empire”. The “more nuanced debate” by Turnbull is described in terms of “distribution of global power” and protection of “national interests” along with “a calmer manner” and avoiding “wild exaggerations”.

However, a “willingness to move back to the policy centre” has failed to address growing disparity in wealth as described by Fabrizio Carmignani. The extremely tough first Budget of the Abbott government was “only partially reversed” in the transition. He sees both prime ministers as deficient in strategic vision around structural reform, dealing with inequality and effective use of fiscal policy to ensure community good.

The book concludes wrestling with leadership issues such as the presidential focus of prime ministers, the current political dynamic and the “revolving prime ministership”. It also contemplates a destructive context to our democracy where “sectional and special interests are privileged over the national interest” and “media struggle to reconcile long-term policy with relentless polling and media cycles”.

This book provides a brilliant opportunity to really understand current politics in the Abbott-Turnbull era.

“From Abbott to Turnbull: A New Direction?” (Echo Books, $29.95) edited by Chris Aulich, available at any bookshop or online direct from the publisher at echobooks.com.au/book-shop/from_abbott_to_turnbull.

Michael Moore was an independent member of the ACT Legislative Assembly and is an adjunct professor at the University of Canberra.

CityNews - May 26, 2020
0
Construction and repair work worth $3 million has started on Lake Burley Griffin's more than half a century old lake walls.