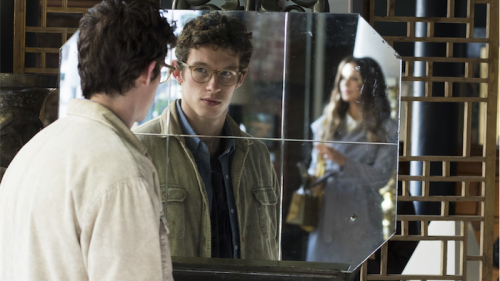 DO you ever wonder about your parents’ lives before you were born?

That question waits beneath the surface of Allan Loeb’s screenplay for director Marc Webb’s agreeably brief (89 minutes) filming of the story of a young New York man trying to find himself among job possibilities, parental influences, love and other fulfilments. When it comes to the surface, its impact may be astonishing but its delivery is muted, to an effect that doesn’t try to make us gasp.

Kate Beckinsale plays Joanna whom we first see smooching in a restaurant with Ethan. Johanna’s independent spirit is a cover for repressed self-doubt. Her influence on Thomas is not what we expect. Or is it?

The best for last. As WF Gerald, Jeff Bridges once again delivers wisdom and emotional impetus both within the story and as the film’s narrator. WF intrudes on Thomas’ life without warning, without apparent reason. His wisdom is profound, his affection for Thomas doesn’t shy away from gentle disputation.

“The Only Living Boy In New York” is a lovely, subtle, convincing, comfortable film delivering optimism, wisdom and family cohesion performed by a fine cast. What more could you ask for?

Review - August 6, 2020
0
If there’s ever a time where a good laugh is needed, this is it. Karen Vickery’s fine production of this very funny and life-affirming play provides comedy and drama equally, writes theatre reviewer LEN POWER about "Brighton Beach Memoirs".