Newton-John was in town to lobby the Turnbull government for more funding for cancer research while the yellow-jacketed adherents to Falun Gong wanted to highlight the widespread practice of human organ harvesting in China.

The "Grease" star was warmly welcomed into the Turnbull inner sanctum and felt the love of starstruck Senators Hinch and Hanson. But after two days of getting physical on the lawns of Parliament House, the Falun Gong had to settle for a quick word from a little-known Greens senator. I guess it's a case of horses for causes.

STILL on Senator Hanson and it's safe to speculate that her Senate-stopping burqa stunt may have forced an upgrade of her personal security back to that of 1997.

In her 2007 autobiography "Untamed and Unashamed" the One Nation leader recalls “the intrusion” of being shadowed by two or three AFP officers from the moment she stepped from a flight at Canberra airport. Senator Hanson wrote: “I was told by the AFP that the threat against me was higher than against any other politician, including the then PM John Howard”.

WHETHER ACT Liberal Senator Zed Seselja volunteered or drew the short straw to appear on "Q&A" is unknown. The Assistant Minister for Social Services and Multicultural Affairs would have known he was the Christian being fed to the lions on the Monday night panel show. The conservative senator was strategically positioned between philosopher AC Grayling and Israeli politician Merav Michaeli – both of whom believe traditional marriage is sexist and should not exist in its current form. The father of five acquitted himself well despite being booed by audience members for his intention to vote no in the SSM postal survey.

MEANTIME, some same-sex couples in Canberra claim to be just plain weary from the debate. One woman who has been in a same-sex relationship for 30 years says she is simply “exhausted” and “exasperated”. Worn down by the relentless pressure of being the focus of attention, she says: “The issue is sucking the oxygen out of the room as it's the only thing people are talking about”. And she is exasperated by the negative comments of the National Party leadership and the non-binding element of the survey outcome.

CANBERRA'S Crows' supporters are in a state of excitement. A healthy and well established Adelaide Crows AFL supporters group – consisting of between 50 and 70 mostly ex-pats – has been gathering at each other's homes to watch the Crows' games. The group even has its own Facebook page, CrowACTive. The pride of SA in Friday's preliminary final and warm favourites to win their first flag since 1999 – the year the Canberra support group formed.

ICONIC Civic cafe Gus' has sprung back into life and, if the long queues on opening day were any indication, Canberrans certainly missed the Bunda Street establishment. Famous for being at the vanguard of al fresco dining in the 1960s, the revamped Gus's Place has given Garema Place the nostalgic touch it is sadly losing. 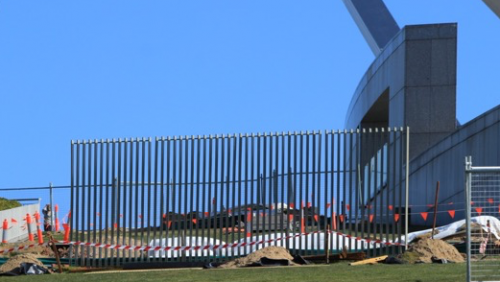 WHILE the coffee house's refurbishment was popular, construction at another iconic Canberra location has been broadly criticised. Within hours of the first metal panel of a new security fence on the lawns of Parliament House being set in concrete, criticism began to flow on social media with veteran press gallery writer Michelle Grattan tweeting “it's appalling”. The 2.6-metre grilled fence is the centrepiece of an estimated $126 million security upgrade for Parliament House.

TWO large, handwritten banners on a house on Belconnen Way at Page are confusing some passersby. Seemingly set for demolition or a major renovation, the property bears two signs which boldly claim: "NOT A FLUFFY". Is the owner/builder making a political statement on the controversial '80s insulation or simply maintaining the real estate value of the surrounding area already dotted with Fluffy houses?