YOU can detest something yet admire the sentiment expressed. That’s the way I feel about the song “Christmas Where the Gum Trees Grow”:

Christmas where the gum trees grow
There is no frost and there is no snow.

This delightfully asinine refrain resonates when you receive Christmas cards designed for the northern hemisphere, dripping with snow scenes and featuring reindeer that would be better as barbecued venison. Again, the sentiment is admirable, the imagery flawed, just like tinsel and glittery snow ornaments. Some Christmases around here the sun gets so hot that pigs cling to the shade: otherwise they might be sun bacon…

The full Christmas turkey roast with all the accompaniments seems to be faltering as a tradition just as the London childhood memory of snow is barely able to be reconceived even with the air-conditioner on full.

There is a move to seafood and elaborate salads. It’s a trend I’m happy to ride. Last Christmas I made smoked salmon starters and duck salad with pear and walnuts for the second course. The food doesn’t really matter as long as it’s prepared for those we care about most dearly.

The 2014 De Bortoli Estate-Grown Pinot Noir that accompanied the duck was slightly chilled so that as the wine warmed to room temperature the bouquet changed and became more complex; redcurrants became distinct. In fact, there would be nothing wrong with emulating this food and wine line up again, although while I have some more of the 2014 De Bortoli, the Vixen has gone to ground and I’d need to purchase more.

But before I dug myself into this hole of complacency, I thought I’d get a reality check from a local winemaker’s representative who is always exuberant (I’d say “bubbly” but when you read his comments, you’ll see that is a groan-maker). I called Fergus McGhie, the sales and marketing manager with Mount Majura Vineyards.

“Well, traditional or non-traditional, everyone loves champagne. The better the quality, the more excited we get. Champagne to celebrate is a no-brainer, including Christmas. The quality of Australian sparkling, especially sparkling from Tasmania is extraordinary. Ed Carr, from the House of Arras has created wines that exceed what the French do; so I’m not drinking French champagne this Christmas,” he gushed.

I thought I’d better ask him about the wine that he markets:

“Oh, yes, we’ve just released the 2016 Silurian sparkling. It’s looking pretty delicious. The team will be enjoying this one.”

So the message is that sparkling wine, whether it be red like I’m used to drinking at Christmas, or the more traditional refined sparkling wine, French or Tasmanian, seems to be a tipple we should enjoy.

But the whole point of the celebration shouldn’t be lost in a mirage of brassy imagery and avaricious purchases or even alcoholic stupor. It is, after all, the celebration of the birth of Christ. Christian or not, we owe this holiday to that event.

At the centre of Christianity is the celebration of love. No matter how you celebrate or what you celebrate with family and friends, make sure that you have at least one toast to your fellow man, to the centrality of love in what we find most precious. And find some shade. 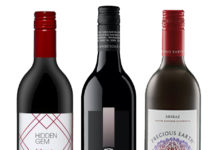