TEMPO Theatre and its director Jon Elphick had a hit in 2016 with their production of “The Vicar of Dibley”, a stage adaptation of the popular British TV sitcom which ran from 1994 to 2007, starring Dawn French.

Tempo’s new production is the Canberra premiere of a second stage adaptation. Director Elphick has managed to retain virtually all the original cast from the 2016 show.

This time the vicar is keen to put on a Christmas show for the small village but enlisting the help of the well-meaning local characters turns out to be not such a good idea.

The resulting nativity play is a disaster but somehow the true meaning of Christmas comes through.

Elphick has directed a very entertaining production with a fine cast who play the wickedly funny characters with enthusiasm. A major strength is the cast members’ skill at mimicking the characters from the TV show. They are all well cast and display fine comic timing, making every funny line work.

Karen Tisdell, who normally graces our opera and concert stages with her fine singing voice, does a creditable Dawn French as the vicar. Her determination to be warm and encouraging, no matter what, is very amusing. Kasey Tomkins is hysterically funny as the terminally dim Alice Tinker-Horton and Sam Kentish is delightful as Hugo, her naive but well-meaning young husband.

As the meek and deadly culinary experimenter Mrs Letitia Cropley, Marian Fitzgerald gives a fine portrait of this woman and her recipes. No-one plays the organ in quite the same way that she does.

Kim Wilson and Garry Robinson are very funny as the snobbish Chairman and pedantic Secretary of the Parish Council and Jason Morton as rough farmer, Owen Newitt, has some of the best one-liners and delivers them like well-targeted bombs.

As the dirty old man, Jim Trott, Elphick is a riot. Watching him play one of the three kings – Billie Jean – in the nativity play has to be one of the comedy highlights of the year.

Tempo Theatre, with this really funny show, have given us an early Christmas present this year. 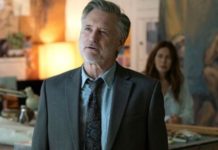