The city should be very proud of the brave Raiders… or so you’d think, but “Seven Days” columnist IAN MEIKLE hasn’t noticed a peep of congratulation or commiseration from our chief minister, no offer of a pat-on-the-back civic reception and nothing especially loud and proud from his sports minister.

CANBERRA’S grand finalists returned to the cheers of rusted-on fans as the hardy hundreds weathered the welcome rain in Holt to thank the Raiders for playing their hearts out.

Not the result they went to Sydney to fight for, but a brave performance matched by peerless post-match behaviour from the players and their often irascible coach Ricky Stewart, whose restraint and professionalism took nothing from the victors but added enormously to the grace of his team in defeat.

The city should be very proud of them. Or so you’d think, but “Seven Days” hasn’t noticed a peep of congratulation or commiseration from our chief minister, no offer of a pat-on-the-back civic reception and, apart from a match-night “proud-of-each-and-every-player” post on Facebook (attracting a desultory 114 likes) and some subsequent welcome-home waffle, there’s been nothing especially loud and proud from his sports minister.

It’s all a pretty ordinary response that plays perfectly into “CityNews” columnist (and former chief minister) Jon Stanhope’s published theory that, after three years of unrelenting political aggression toward the principal clubs of Canberra and their barker ClubsACT, Labor’s unforgiving leadership can’t rise above the scrum to thank the team that’s put Canberra on the rugby map again after 25 years trying.

WOO-hoo, the ACT has recorded a record number of visitors to the national capital, according to the latest data from Tourism Research Australia’s Visitor Survey, which has 5.48 million of them spending $2.82 billion in the year to June. This includes 266,278 international visitors. Chief Minister Andrew Barr loves to remind us of the unquestionable success of international flights to Canberra and the government’s external marketing efforts. But he must be gutted given the number of times he has oscillated between here and Singapore extolling the virtues of visiting Canberra to see the island state’s percentage of visitor numbers at 3 per cent (number 7 on the 10, topped by China at 20.5 per cent, then daylight to the UK at 8.2 per cent and the US, 8.1 per cent). Even more galling when one considers one of the two international carriers is Singapore Airlines. 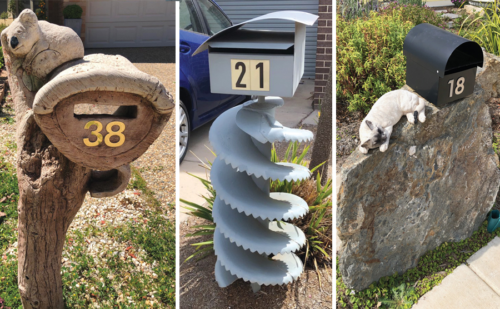 THE newly minted member for Yerrabi Deepak-Raj Gupta, he who filled the shoes of the Labor’s former rising star Meegan Fitzharris in the northern electorate, sets himself a daily target of shaking hands with 10 people. That’s, say, 70 a week, 300 a month and, with precisely a year to the next election, that 3600 possible votes. With 60,000 electors to face and a re-election quota of around 20 per cent of that to make (in 2016 he got 2973 votes), Deepak is already supplementing the handshakes with diligent door knocking. And while he wanders the unsuspecting wilds of Gungahlin in search of more hands to shake he notices his constituents’ letterboxes and takes photos of the interesting ones. Pictured are some he’s snapped around Forde and Moncrieff.

MORRIS Construction Corporation is testing the ACT government’s love of high rise by refusing to urgently rectify serious defects at its Kingston Place apartment block, arguing it might cause further damage to the building.

The government has been forced to step in and arrange for the work to be completed. Morris will still have to pay for work to install about 235 props throughout the building, including on the balconies of more than 30 apartments, and faces a fine of up to $1.62 million for refusing to comply with the emergency rectification order.

DESPITE a spike in ACT housing construction, there’s been a slump in the construction of detached housing, which has reached its lowest levels since September, 2017, according to quarterly figures from the Australian Bureau of Statistics.

Needless to say, the apartment sector was responsible for the recent uptick, with construction work starting on 883 units, a 63 per cent increase on the previous quarter.

Housing Industry Association ACT chief Greg Weller is quoted as saying the high price of land was a “handbrake”, as were continued delays in the development assessment process.

MEANWHILE in Leichhardt Street in Kingston, Icon Water has told 16 small businesses (including a cafe) to go without water for a day this week while a neighbouring unit development gets connected.

“We suggested they could do it on a Saturday at the developer’s expense,” writes one business owner, “Icon said ‘no’.”

“So the small businesses in our building have to provide bottled water and portaloos at our expense so that the developer doesn’t have to fork out. Icon is intransigent. This is appalling.”

CityNews - April 7, 2021
0
An Aboriginal man was denied treatment after he was pepper sprayed in the face during an arrest that has since been labelled unlawful in court, reports Winnunga Nimmityjah Aboriginal Health and Community Service CEO Julie Tongs.