WHAT an exciting musical experience it must have been for players from the primarily community-musician-based National Capital Orchestra to perform with the outstanding world-class clarinettist Eloise Fisher!

Her performance of the famed Mozart “Clarinet Concerto in A” was just brilliant and was surely inspirational for the orchestra members who shared the stage with her.

The concert opened with the Canberra premiere of a relatively new work (written in 2014) by Melbourne-based composer May Lyon. The symphonic poem “Orchestral Equations” is loosely based on the solving of a 17th century mathematical puzzle and explores the solving of the puzzle over a three-century period. The orchestra sounded tentative and uncertain dealing with exposed and demanding rhythms though there were lush and confident contributions from principal cellist Evelyn Andrew and the cor anglais of Caroline Fargher.

After perfecting her craft performing throughout the world, Eloise Fisher has returned to Canberra to assume a position on staff at the ANU. Her vast experience shone through as she produced a simply beautiful sound throughout the clarinet concerto. Her clarity of tone, wonderfully controlled and contrasting dynamics and crisp, clean tonguing were a joy to hear, this really was a performance from a player of world-class standard. And she performed the concerto from memory, a stunning achievement in itself!

The orchestra provided solid and in-tune backing throughout though there was a lack of sustaining quality in the adagio movement, which then didn’t match the drawn out beauty produced by the soloist.

He is a world authority on the music of Rimsky-Korsakov and recently presented a paper in St Petersburg at the 175th anniversary conference of the composer’s birth. It was most fitting therefore that the second half of this concert opened with the exciting “Antar Symphony” by Rimsky-Korsakov.

Cook is particularly clear and well defined in his neat conducting style and his enthusiasm extracted a full-bodied and confident sound from his players, particularly during the louder, fully scored sections when the orchestra produced fine tonal quality and a rich overall sound. There were occasions when phrase endings fell away with resultant raggedness, but overall this was a competent performance of exciting music.

The concert ended with a spirited performance of the Borodin “Polovtsian Dances”. The delicate introduction was well handled before the tight wind section led the orchestra well through the technically difficult and demanding rapid dances.

Once again conductor Cook maintained tight and well-disciplined control to end a concert of fine musical variety which suitably entertained an appreciative audience. 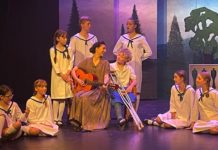