HOME-phone connections have halved since 2001, when more than 96 per cent of Australians had one at home.

This halving has occurred over the last two decades as new technologies including mobile phones, broadband internet and subscription TV have made increasing in-roads to Australian households, says Michele Levine, CEO of research company Roy Morgan. 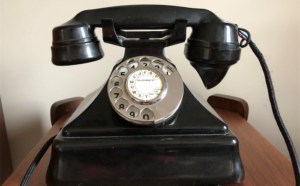 She says the incredibly fast take-up of these new technologies and the almost ubiquitous usage of mobile phones (now used by 95.9 per cent of Australians) has accelerated the decline of the home phone.

Now less than half the population has a home phone connected (48.6 per cent), down 9.5 per cent from a year ago.

These findings from the “Roy Morgan Single Source Survey” are derived from in-depth, face-to-face, personal interviews with more than 50,000 Australians each year in their homes.

Levine says the exceptionally fast take-up of subscription TV over the last few years is attracting a field of competitors keen to grab a piece of the action.

“The stunning growth in subscription TV in Australia is clear by looking at the trends for rival technologies over the longer term,” she says.

“This growth has been largely driven by Netflix which is now available to 11.5 million Australians only four years after launching their Australian service early in 2015.

“However, Netflix is being increasingly challenged by ‘cashed-up’ rivals keen to gain a foothold in the growing market and prevent Netflix from gaining any benefits from incumbency and market power.

“Rival subscription TV services including the locally-owned Stan, accessible by nearly three million Australians, as well as international competitors such as Amazon Prime Video and YouTube Premium are also growing strongly in Australia and providing an increasing challenge to Netflix.

“The recent ‘tie-up’ between Netflix and long-term Australian Pay TV provider Foxtel presents opportunities for both as well as representing a somewhat defensive move as Apple TV+ and Disney Plus are set to enter the Australian market in the near future.

“Disney Plus is set to launch in Australia in November with a price of only $9 per month setting the price point below both Netflix and Stan and with a yearly cost of only $89 – cheaper than the monthly price of many Foxtel packages.

“The stunning rise in subscription TV in recent years remarkably means that more Australians now have household access to the likes of Netflix, Stan and their rivals than a home phone connection.”