“It was uncomfortable (but slightly entertaining) watching Minister Stephen-Smith flounder so badly, trying all the usual clichéd answers. None of the usual spin and avoidance tactics were working,” writes Canberra Matters columnist PAUL COSTIGAN

HOW many times can ACT apparatchiks use terms such as: “We are very conscious of what you are saying” or “I take your point” and then completely devalue the issues with misleading information.

Apparently, as many as it takes to avoid difficult questions. This is what happened at the July Woden Valley Community Council meeting when such phrases were repeated by planning bureaucrats and the Minister for Urban Things, Rachel Stephen-Smith.

Stephen-Smith had come to the meeting to talk about the future of the former CIT site near the hospital. That was the easy bit.

Then the real discussions commenced and it became apparent that this Minister for Urban Renewal was not aware of the depth of feeling within Woden about the lack of arts, community and sports facilities and the diminishing green spaces.

The politest version of events is that this politician did not manage the situation well as the Woden community’s questions and statements poured forth.

When asked several times about why Woden was missing out on facilities when the population was rapidly increasing, she tried desperately to deflect the queries with the well-practised spin. Her response was to try to universalise the issue – to talk about how other areas of Canberra are faring with facilities – even mentioning how the inner-north is asking for things (not mentioning that she has ignored such requests).

The temperature rose when the recent Sport Minister Yvette Berry’s report of sports facilities was discussed. This report used data from the major organisations, mostly located in northern Canberra, that dismissed the missing facilities as identified by the Woden community. Again, Stephen-Smith trotted out more clichés and seemed to hint that this troublesome issue was someone else’s doing (namely Yvette Berry’s).

On the night, it was uncomfortable (but slightly entertaining) watching her flounder so badly, trying all the usual clichéd answers. None of the usual spin and avoidance tactics were working. Her “support” bureaucrat was offering nothing simply because Woden residents have missed out on so much and there was nothing she or any bureaucrat could say to justify the obvious.

It became clear that she was unable to admit that so many things were wrong despite all the facts being placed in front of her. When that item finished, she left quickly.

Then came an even more wondrous presentation and questions about a small community designated site in O’Malley. After a brief introduction, residents were addressed by a traffic specialist who carried out his presentation as if he was a TV quiz host – complete with distracting jargon and stage movements. His presentation was based on specialist surveys that produced statistics against some magical traffic-specialised set of measures. No matter what he said to illustrate that the situation was not too bad, residents continued to respond (sometimes very loudly) with their real-life experiences of the parking and the traffic mess associated with this part of the suburb.

It is this small site, designated for community use decades ago, that the government had moved to sell but had no idea of its future use. So for the last few years the residents have had surveys, traffic studies and other bureaucratic noises on how the site could be used. Attention on this site has focused the residents on the larger traffic issues (trying to exit during peak hours) plus the street-parking problems.

Many “I hear what you are sayings” later, nothing was resolved. Maybe the chief planner, who was present, may decide that this silly waste of resources needs to stop, traffic lights urgently should be installed and something done about the parking. As for the site and its trees, maybe confirm it as a green space for evermore.

Is anyone within the ACT government capable of acting on what Woden residents are saying? It’s about community, arts and sports facilities, green spaces and traffic issues. 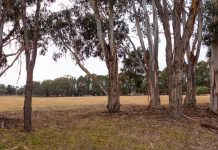