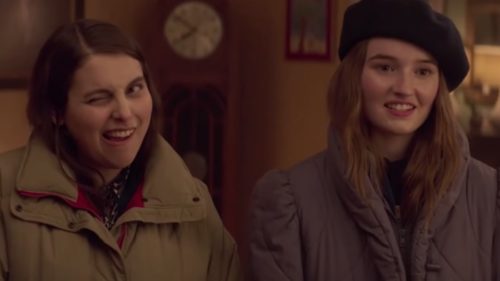 “BOOKSMART” unfolds over the day before high school seniors graduate and the following day when they set out on the life journey that really matters.

Director Olivia Wilde’s directorial debut after a long, relatively undistinguished acting career has staged a story written by Emily Halpern and Sarah Haskins as if the graduating class had spent the year forming relationships, developing cliques or preparing to stage the most memorable end-of-school party.

Only Molly (Beanie Feldstein) and Amy (Kaitlyn Dever) have spent the year achieving stellar academic records, at the expense of social skills.  And they decide that they need to rectify that oversight big time.

The film is about how they go about doing that. They haven’t learned where classmates are throwing parties. Neither has clothes sense. Alcohol is a new country for them. And sex is nothing more than a three-letter name for what other kids have been exploring all year.

The prospects for Amy and Molly to break new ground in the end-of-school genre might have been brighter if Wilde had designated a less frenetic function for the extras playing background student characters.

Most of all, “Booksmart” focuses on Amy’s stronger role in the relationship with Molly. Molly knows that her pudgy body limits her prospects of attracting a boy. Amy, unsure of her sexuality, hopes to find a girl with similar feelings among the crowd but retreats when the knickers come down.

I trolled through a list of more than 400 American peer reviews seeking a reliable measure of how “Booksmart” rated on its home turf.  The majority gave it fewer than three out of 10 stars. ‘Nuf sed, I reckon.