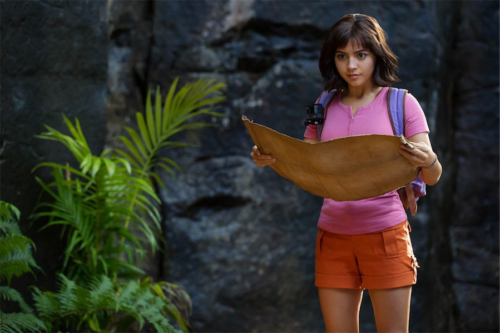 “This little pile of juvenile nonsense comes from a long cinematic blood-line, from fantastic titles such as ‘King Solomon’s Mines’ and just about every ‘Tarzan’ movie.” With one star, movie reviewer DOUGAL MACDONALD isn’t fussed about “Dora and the Lost City of Gold”.(PG) *

THIS little pile of juvenile nonsense comes from a long cinematic blood-line, from fantastic titles such as “King Solomon’s Mines” and just about every “Tarzan” movie starring just about every actor who ever played Tarzan. And a TV juvenile series running to 136 episodes.

Dora (Isabela Moner) lives in the Amazonian jungle with her parents (Michael Pena and Eva Longoria) whose profession when they’re not educating their daughter seems to be explorers (a fact influential in Dora’s growth but not apparent in the film).

After a prologue involving Dora in early childhood, the film jumps a decade to reveal a pleasantly pubescent teenager who begins the film by travelling to civilisation (played with little sense of obligation by Los Angeles) to attend high school. Dora’s naivety is manifest. She meets her cousin Diego (Jeff Wahlberg), gets offside with older girl Sammy (Australian actress Madeleine Madden) and finds a kindred spirit in nerdy amateur astronomer Randy (Nicholas Coombe).

By a process too complex to justify summarising, the four find themselves back in the Amazonian jungle, together with an older, somewhat too-jovial-for-comfort, explorer friend of Dora’s parents, questing for the lost Inca city of Parapata, famed for its hoard of gold.

The director is James Bobin, best known for directing “Muppet” episodes. His CV gets one unique addition from this film. He must surely be the first, the only, person to discover elephants in the Amazonian jungle!

At Dendy, Palace Electric and Limelight

Paul Costigan - August 11, 2020
0
"The debate about the future of the Australian War Memorial needs to focus on the fact that this institution is a memorial. It is about people. It is about remembering those who served, those who suffered and those who survived," writes "Canberra Matters" columnist PAUL COSTIGAN.