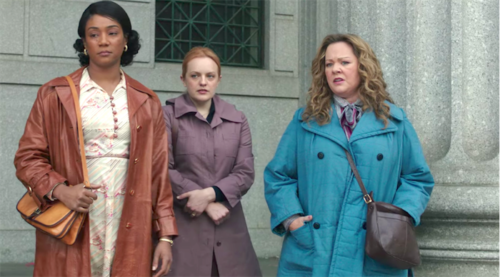 NO, Andrea Berloff’s directorial debut is not a big-screen pickup of the TV foodies series. Its genesis is a DC Comics comic book written by Ollie Masters telling a gangster story from a fresh viewpoint.

So why yet another gangster movie? To make money, of course. But more importantly, to divert the comic-book genre to a new track uncluttered by impossible super-heroes, intergalactic attackers and monsters that exist only in the overheated imaginations of writers. So what’s cookin’ there?

On the West Side of Midtown Manhattan, since at least the beginning of last century, Hell’s Kitchen was controlled by Irish and Puerto Rican gangsters. After repeal of Prohibition, gambling and union shakedowns replaced bootlegging as the prime industry. Not until the mid-1980s did gentrification clean the place up.

So how do Kathy (Melissa McCarthy), Ruby (Tiffany Haddish) and Claire (Elisabeth Moss) fill the income shortfall? They go around offering to protect small business from the mob collectors who have traditionally provided that public amenity. And that’s what Masters and Berloff have made into this movie.

It’s an agreeable entertainment, shining a light into some grubby corners of the Big Apple to tell a story with average credibility and a depth verging on the brink of moral depravity. McCarthy once again shows that she does drama better than the comedies that began her career.