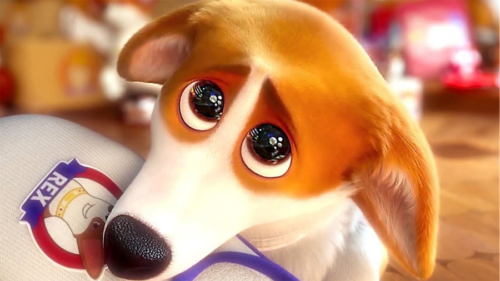 REX (voiced by Leo Barakat – or is it Jack Whitehall? – the Internet Movie database is having an each-way bet on the actor’s name and frankly, as we never see the face behind the voice, it doesn’t matter!) wears the Golden Collar, signifying Rex’s superior status among the four corgi dogs living the luxurious life at Buckingham Palace.

What begins as an escape becomes a dynastic conflict. When Donald Trump has dinner at the Palace (garnished with bad manners) his corgi Mitzi shows a lustful desire for Charlie. More of that about 75 minutes later. Meanwhile …

Rex and Charlie survive traffic along the Mall before Charlie pushes Rex off a bridge into the Thames. Her Majesty (Julie Walters – or is it Marie Devon – another IMDb each-way bet) is distraught when Rex goes missing. Dragged from the river, Rex is taken to a lost (more correctly, found) dogs’ home where he meets Wanda at Fight Night. Will love triumph? Yes, of course it will, but not before adventures including setting the Palace alight and Charlie getting what he most craves – Rex’s golden Top Dog collar.

Your preference for monarchy or republic may well determine how you view this pastiche of canine inanity. Kids will like it. Adolescents may well treat it with disdain. Adults may see it as a satire on the monarchy (but that’s not compulsory). IMDb says it has already taken $US35 million.

Thumbs up for pretty, peaceful dining at the river