THIS dramatically variable movie – comical one moment, complicated next, confused in between – won the SACD (Society of Dramatic Actors and Composers) prize at Directors’ Fortnight at the Cannes Film Festival last year and collected awards for Best Film, three Best Actors and nominations in five technical categories at this year’s Césars (France’s equivalent of the Oscars).

Two-years widowed, police lieutenant Yvonne (Adele Hanael) every night tells her small son bedtime stories about what a great bloke his dad was, another cop with a reputation for getting results. Today, she has just unveiled a statue to his memory. Her enthusiasm for her job gets a shock when she learns that eight years previously, he had framed an innocent man for a robbery.

Antoine (Pio Marmai) is due for release this afternoon. His loving wife Agnes (Audrey Tautou) is busy getting the house clean for his homecoming. Prison has changed him. He talks a lot – to himself. His insecurities are patent. He gets home early. Agnes’s joy is manifest; will he, she asks, please repeat his early arrival again and again so she may feel the joy?

Yvonne went to school with Antoine, who in those days thought she looked a bit ugly. She now feels an obligation to make amends for her husband’s criminality. Without revealing her job, she stalks Antoine and unexpected desire develops to compensate for her two years without adult intimacy. Which is bad news for her colleague Louis (Damian Bonnard) who thought he might have a chance.

Writer Benjamin Charbit offers director Pierre Salvadori a couple of comic diversions. Three private security guards watch monitors showing a crime in progress and think it’s a TV movie. Louis is too busy trying to make time with Yvonne to listen to the meek little man carrying three plastic bags who implores him to look at the pieces of his latest victim.

“The Trouble With You” sometimes seems not to know where it wants to go. Its complicated scenario does plead for filmgoer forgiveness, which should not be too difficult. 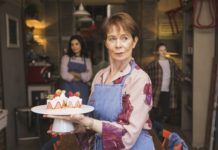