THE government-as-developer used a different bag of tricks to convince locals how irresistible was the concept design for a new Common Ground complex to be built on the south-east corner of Section 72 Dickson (the Dickson Parklands), reports “Canberra Matters” columnist PAUL COSTIGAN.

AS happens regularly across Canberra, developers have a set style in their presentation to community groups.

Residents have become numb (possibly bored) to the enthusiastic spin about how vibrant the building will be, how wonderful a job the architects have done, how it will be a fabulous addition to the neighbourhood and be linked to the tram, no matter how far away it is.

Most of the time the audience at these painful sessions remain polite (but not always).

On Wednesday (October 16) at the North Canberra Community Council meeting there was a variation on this.

This was a presentation by the government as developer using a different bag of tricks to convince locals how irresistible was the concept design for a new Common Ground complex to be built on the south-east corner of Section 72 Dickson (the Dickson Parklands).

The difference between the usual developer presentations and this was that the presentation was undertaken by a couple of upstanding community representatives with obvious links into inner-ACT government circles.

The worthy luminaries were enthusiast about how fantastic Common Ground Gungahlin has been. The enthusiasm reached a crescendo at one point that I fully expected a heavenly choir to appear.

The tone was such that surely no-one could contest the concept for such a worthy facility to be on this precious Dickson site.

To oppose what was presented would be to be seen to be against opportunities to assist homeless women and to be seen to taking a stand against such an overdue facility being placed within the inner north.

It worked! Sort of. At least for the small number of residents who ventured out for this meeting (the numbers were down on the normal attendances).

Things were not so settled when the queries flowed while the presenters were present and more so after they had departed.

There are serious unresolved issues about the initial proposed concept especially as residents know only too well that things always change later. The amount of parking proposed is below what should be expected for this housing facility and safety will be a serious issue given the isolated nature of that corner of the parklands site. 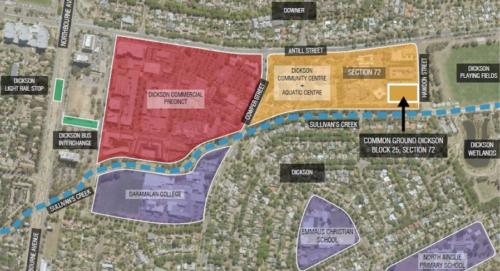 Another query was about building heights. It is to be six storeys in places. Yet as the Minister for Urban Renewal, Rachel Steven-Smith said very recently: “Common Ground Dickson’s proposed design reflects what we have heard the community wants to see in Section 72. It comprises primarily low to medium-rise elements of up to four storeys”.

Seems the Minister for Urban Renewal is the loser in this deal along with the residents who were clear that for the whole site – three to four storeys should be the limit. And as is well known, many developers often get a variation late in the process to plonk another floor or two on top. At this point only the developer (the government in this case) knows what the final height might be.

Finally, two queries that were left out there. One person dared to suggest that the building as proposed was boring – was too industrial looking. That did not go down well even though it was factual.

The other was a question about responsibility. To paraphrase: “Who proposed this for this corner of Section 72 when there are better options elsewhere within the inner north?”

That question was unanswered. (The answer is that it was their boss – Yvette Berry). Let’s not mention who cleared the public housing from Northbourne Avenue.

However, despite all the preparation and positive energy that went into this Common Ground presentation, it was the wrong presentation. Sad, but true!

What people are more concerned about is trying to get their heads around what is being proposed in the way of changes to the zoning for this corner of Section 72. Whatever is approved in this corner will most likely be the Trojan Horse for allowing the rest of Section 72 to be developed for some form of housing rather than community cultural facilities.

Will the Minister for Urban Renewal fight for the community’s aspirations for the rest of the site having lost in the first round?

To sum up, on the night the consensus was that there should be a new Common Ground complex in the inner north. On this site? That’s another story.

From the presentation it is now clearer that Common Ground is not about temporary accommodation. Its operations are about providing 40  units for selected homeless people to occupy for so long as they wish – that could be permanently. During this they will have access to on-going in-house assistance on a range of matters to get their lives together and beyond that.

The reality will be that the number of homeless to be assisted will be minimal when rated against the queue that is possibly around 1500 plus people, based on previous published figures.

The message from here is that residents who want to see Section 72 Dickson remain as a community cultural site need to get themselves online and look at the variations being proposed.

This is not an easy task as this stuff is complicated. It is not made easy for residents to access the details hidden away among the developer’s (the government’s) small mountain of documents to work out what is going on and what the longer implications will be for the larger site.

For more on Draft Variation 367 that will apply specifically for Common Ground Dickson – click here and scroll down to the relevant sections.

Written comments about the draft variation are invited until COB, Friday,  November 1. 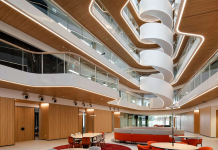 Helen Musa - May 3, 2021
0
Emma Batchelor has won a publication deal with Allen & Unwin for her debut auto-fiction novel “Now That I See You”, based on her experiences when her partner’s emerging transgender status shattered their relationship.