FOR CEO of the Australian Institute of Aboriginal and Torres Strait Islander Studies and proud Dhunghutti/Biripi man Craig Ritchie, yesterday (December 4) was a great day for AIATSIS, with the launch at the National Museum of Australia of an important new exhibition, “Ngulla Wellamunagaa: Trees that have survived and revived”.

“It’s the first time we’ve created our own exhibition, drawn from our own collection,” he said.

“The powerful work in the show is all drawn from indigenous cultures… it values and celebrates the stories of Aboriginal and Torres Strait Islanders Australians as it tells the story of this nation.

The objects in “Ngulla Wellamunagaa”, he explained, relate to the principles behind that story.

“The really important thing and the power of our cultures is that they’re still living, still at work,” he said.

The central theme in the show of objects and art works, he said, was to do with trees, which have survived and revived. The roots of the trees signified depth and strength and the flowers, which produce seeds, signified the transmission of culture.

Leonard Hill, the executive head of collections at AIATSIS, reflected on the material and the way in which the institute’s curators had carefully observed respectful community engagement.

He drew attention to one of the “characters” of the exhibition, Mickey of Ulladulla, who had, in the late 19th century, gained fame by practising a different form of art from the traditional Yuin art. His drawings of maps and even European ships provide a unique perspective of Aboriginal experience in the nineteenth century, bearing witness to a period of immense change brought about by colonisation.

“A way of life is brought to life in this exhibition,” Hill said.

AIATSIS curators Pat Williamson and Paris Norton were on hand reflecting on the results of their curatorial work.

Williamson said it had been a pleasure “unlocking the vault” so that both the public and Aboriginal and Torres Strait Islander people could see some of what the institute held.

Norton said that while most of the 35 or so objects on show came from the collection, there were some objects drawn directly from community organisations, allowing “first voices” to be heard.

Among the many exhibits is an example of “prawn-weaving” by Cairns designer and artist Grace Lillian Lee, who is renowned for her sculptural body adornments. Lee has been exploring her Torres Strait background with her mentor Ken Thaiday Senior and believes prawn-weaving as a technique travelled down from Papua New Guinea through the pearling industry.

A spectacular work in etched aluminium by artist Brian Robinson, whose paintings, prints and sculptures are inspired by his Torres Strait Islander heritage, is “Malu yawa garka: Ocean guardian” to tell the creation story of the Great Barrier Reef as narrated by Gimuy Walabura Yidinji elder Gudju Gudju, (Seith) revolvign around the stingray, one of the totems of the Wuthathi people.

In “Walking in two worlds”, Ngaanyatjarra artist Cynthia Burke has created a woven sculpture recalling the 1977 journey of her grandfather, Mr Eddie, across Pipalyatjara country to Warburton in WA, documented in Robyn Davidson’s book “Tracks”. 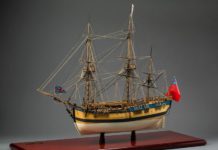 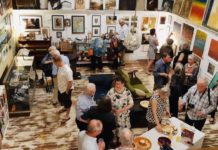 Paul Dorin - March 23, 2020
0
Cartoonist PAUL DORIN has found something to do with those excessive toilet rolls!