SINCE 1972 the Brodsky Quartet has been in existence. Original members Ian Belton and Jacqueline Thomas are still with them today. They have maintained a world-leading standard for almost fifty years.

In the Brodsky Quartet from the United Kingdom are Gina McCormack and Ian Belton on the violin, Jacqueline Thomas on the cello, and Paul Cassidy on the viola.

Bach’s “Contrapuncti I and VI” from “The Art of Fugue” works well for string quartet due to the clarity of writing. A string quartet can expose music like few other mediums, and when it’s Bach in the hands of the Brodsky Quartet, it is sound quality at its finest.

Moving to Mozart, his “Adagio and Fugue” KV 546, the style changed, but the quality didn’t. Brodsky Quartet seems to be able to play any style of music with perfection, even the music of Björk. At the end of the Mozart, the hushed “wows” from several in the audience were quite audible.

Felix Mendelssohn’s “Fugue in E-flat Major” from “Four Pieces, Op. 81 no. 4″ had a similar story to tell as the first two works. The beginning of a melody that moved between instrument to instrument made for some lush sounds and few ever did it as well as Mendelssohn. The light touch in this fugue speaks loudly. The wavering notes that flow between one string voice to another were hugely effective, and the playing, to die for.

What compares to Beethoven’s “Fugue in B-flat Major (Grosse Fuge)”? The fire, the complexity, the sound is extraordinary. This piece grabs a listener and does not let go. The players in the Brodsky Quartet made it magnificent, especially Gina McCormack on violin, who gave it her all and more at times. Looking at the score for this grand fugue is tricky enough, however, playing it is something else, and this quartet did such a great job that it was a testament to their world-leading status.

The sinuous, slow opening of Bartok’s “String Quartet No. 1 in A minor” does not set the tone for the rest of the quartet. The colour and variations that develop throughout this work build and build with dance rhythms, folk music, harmonics and deep grinding tones on the cello.

This piece of music screams at a listener at times. The thunderous plucked and slapped notes on the cello, the high loud violins and the strong and forceful viola cutting its way through the middle. The tempo and dynamic variations are forever restless.

This piece can sound extra-musical to some listeners, as though it sits outside the realm of known sounds, especially when it was written in 1909. However, it is all done with great technique and with startling effect. Just like all the music that the Brodsky Quartet play that sees them sitting atop of the string quartet world.

After several demanding rounds of applause, they encored with an arrangement by their own violist Paul Cassidy of Mendelssohn’s “On Wings of Song”, which brought the heart rates down and people standing up applauding. 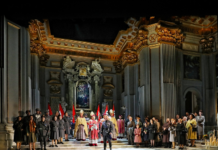