UNIONSACT is alerting employers about the risks of bushfire smoke, saying there is no safe exposure level for air pollution like smoke.

The National Pollutant Inventory, of the Australian Government Department of Environment and Energy, advises that no level of PM2.5 (smoke) is safe to someone’s health, which is why UnionsACT is reminding employers of their legal duty to provide a safe working environment to their employees, including volunteers.

UnionsACT says employers have a legal duty to ensure that a work environment is safe and without risks to health. That covers everything including smoke inhalation, potential injury or death, asbestos from burning materials or toxic fumes.

The Australian Institute of Health and Welfare has estimated that ordinarily about 3000 deaths are attributable to air pollution, including smoke, in Australia each year. For example, cardiac arrest was found to increase in Melbourne during the summer of 2006 to 2007, when smoke from fires affected Melbourne residents.

Employers cannot claim ignorance to risks of air pollution posed from bushfires, according to Unions ACT. This was recently shown in a ruling handed down on November 20, 2019, against Hazelwood Power Corporation Pty Ltd by the Victorian Supreme Court. The employer was found guilty of neglecting to take adequate precautions in 2014 given the risks posed by bushfires nearby, when they spread into the open-cut mine, covering the nearby areas in smoke for six weeks. Many workers and community members suffered injuries and fatalities.

Under Workplace Health and Safety (“WHS”) laws UnionsACT says any individual worker may cease or refuse to carry out work if they are concerned about a serious risk to their health or safety emanating from an immediate or imminent exposure to a hazard, and are protected from dismissal.

“If you are concerned about the impacts of bushfire smoke at your work, you should contact your union, or Worksafe if the matter is urgent,” says UnionsACT secretary Alex White.

Smoke is expected to be around until Thursday.

The National Library in the smoky gloom of sunset earlier this month… Smoke from fires in NSW and Victoria remains in the ACT and is expected to thicken with wind changes in the afternoon. Photo: Sabine Friedrich 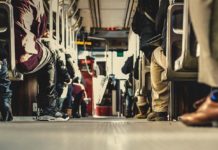 Helen Musa - March 3, 2021
0
“Folk – it’s a big, beautiful word and for me, it’s the sound of the stories of the room,” Katie Noonan, new artistic director of the National Folk Festival, tells arts editor HELEN MUSA.