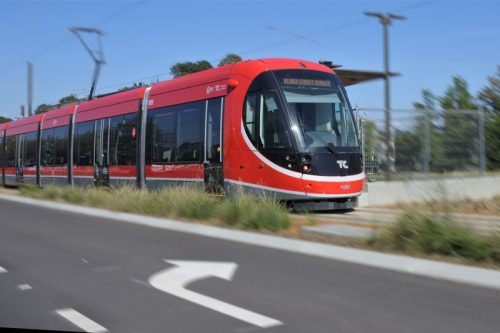 The ACT government has formally approved the business case for the 1.7-kilometre light rail stage from Alinga Street to Commonwealth Park.

The government announcement did not include any of the business-case metrics nor a construction cost.

The Labor/Greens government has been frustrated in its plans to take the tram to Woden by necessary approvals from the Federal government to take light rail through the Parliamentary Triangle.

It believes that by starting work on “Stage 2A” it will capitalise on the jobs and expertise developed through the Stage 1 construction phase. as we continue to work with the Commonwealth Government on the necessary approvals for light rail to progress through the Parliamentary Triangle to Woden.

With work expected to begin on the Commonwealth Park extension as early as next year, the government believes it will be ready to proceed with Stage 2B linking Commonwealth Park to the Woden Town Centre once the approvals have been granted.

The stage 2A extension will add three new stops at City West, City South and Commonwealth Park through residential areas, business precincts, the ANU, the Canberra Visitors Centre, entertainment and retail areas, through to the designated transport corridor to Woden.

The government has also announced that it will be raise London Circuit to the same level as Commonwealth Avenue to enable better walking, cycling and public transport links between the CBD and the Acton Waterfront. This linking project was first foreshadowed in the Government’s “City to the Lake” plan.

“Major projects such as light rail have the potential to create jobs, support local industry and grow the ACT economy,” he said.

“Today’s announcement should demonstrate to the Federal government that the ACT is laying the groundwork for a long-term infrastructure plan, and be a starting point for encouraging more Federal infrastructure funding for the territory.”

CityNews - January 23, 2020
0
THE ESA has released a map showing the extent and danger of two out-of-control fires around Canberra airport.