THREE officials from the ACT Branch of the Construction, Forestry, Maritime, Mining and Energy Union (CFMMEU) have been personally penalised almost $160,000 after they were involved in unlawful picketing at a Canberra building site in 2018.

The Federal Court ordered CFMMEU ACT secretary Jason O’Mara, assistant secretary Zachary Smith and organiser Joshua Bolitho to personally pay the penalties ordered against them, and the orders prevent the union from paying their penalties for them.

On May 15, 2018, at about 5.30am, Mr O’Mara, Mr Smith and Mr Bolitho, and a group of 20 people, linked arms at the main entrance of the $300 million Constitution Place Project – a 12 level commercial project in the heart of Canberra, and blocked pedestrian and vehicle access through the main entrance gate.

CFMMEU-registered cars were also parked at in front of the main entrance, and when site management requested the cars be removed, they were told by the CFMMEU officials that they could not find their keys.

Locks and chains were also placed on entrance gates preventing access to the site. A bus carrying a group of workers was unable to access the site.

Project management was forced to use bolt cutters to gain access through the gates and police were called to the site. The unlawful picketing lasted for two hours.

Justice Katzman, when penalising the officials, said: “It is evident that neither the penalties imposed in the past nor the repeated imposition of penalties has had any deterrent effect. Indeed, it is reasonable to infer that the union takes the view that paying penalties is merely a cost of doing business.”

“In the absence of evidence to the contrary and in the light of its appalling record, the inference is open that the union has done nothing to encourage its officers and employees to comply with laws that stand in the way of its industrial objectives. There was no suggestion, let alone evidence, to indicate that the union has established any systems or processes to ensure that its officers or employees comply with the law,” she said.

The judgment noted, as with previous cases, the absence of contrition or remorse: “The respondents eschewed any notion that they were entitled to any leniency because their admissions represented an acceptance of wrongdoing, let alone a ‘suitable and credible expression of regret’. Indeed, none of the respondents offered an apology or exhibited any contrition.”

In December 2016, the Federal Parliament passed laws to address unlawful picketing in the building and construction industry.

The Australian Building and Construction Commission commissioner Stephen McBurney said: “This case is a further example of the Union taking the law into its own hands. There was a clear alternative and lawful path to follow, this was the dispute resolution clause in the relevant enterprise agreement, but the union was not prepared to wait to allow the agreed procedure to run its course.” 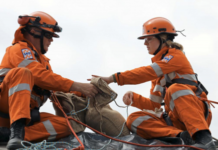