Is this the Happiest Kingdom of them all? The ACT government seems to want you to think so with its hot mix running hot and lots of optimistic signs to remind you how much they care without reminding you how much debt they’ve wracked up! It’s “Seven Days” with IAN MEIKLE.

ANYONE else feeling exuberant about the dizzying municipal fizz around the town?

Roads are being resurfaced, pavements refurbished, there seems nothing that’s too much trouble as the government cushions the arrival of those lumpy annual rates envelopes across the city.

While 10-year treasurer Andrew Barr confirms a billion-dollar dive this financial year, “CityNews” readers already know that the accumulating debt load of a decade of Labor-government deficits made the ACT ill-prepared for the bushfires let alone the covid crisis.

Nevertheless, the Deficit King was in full, shameless spin: “We have benefited from the strong local economy that we built leading into this global health and economic crisis. This position allowed the ACT government to invest heavily in our community to protect jobs and inject immediate cash into our economy.

“It is from this strong foundation that we will drive the ACT’s economic recovery.”

Opposition Leader Alistair Coe begged to differ and was on his hind legs in the dying hours of the Assembly before the October election.

“In 10 years since he became Treasurer, Mr Barr’s economic mismanagement has taken the ACT Budget from $473 million in the black to a projected $4 billion in the red,” said Coe.

“And all this before covid hit.

“Every year this Labor-Greens government takes more and more from Canberrans through staggering increases to rates.

“At the very least you would think that just some of this money would have been put away for a rainy day. To help Canberrans when they need it most. That is what responsible economic management would look like.”

Does it look something like the sudden arrival of those mischievous and huge government signs? I’ve included three. One promises to upgrade the road. When? Who knows. Another is planning to “signalise” an intersection. When? Not disclosed. The third is outside the Gungahlin cemetery and oddly proclaims a new crematorium is “coming soon”, hopefully not an eternity.

Clearly these (arguably illegal) vacuous billboards are intended to alert the community to the great things the government is planning to do (presumably not any time soon, but probably on the other side of the election). Surely, this can only be seen for what it is: taxpayer-funded re-election advertising.

WITH the Assembly rising, Liberal stalwart and Ginninderra MLA Vicki Dunne has effectively retired, but not before she shone some light on some shameful treatment of disadvantaged children in the ACT.

As the shadow health minister she managed to drag out of the government the scandalous revelation that Canberra families are waiting more than four years, on average, to get their children into an initial health appointment and that there are nearly 4000 children under the age of 16 years on the list. Four years!

As at June 30, the median wait time for an appointment was as long as 1490.5 days, according to data released to Ms Dunne in response to questions on notice in the Assembly.

“Young children waiting more than four years in some instances for a health appointment is evidence of a system in breakdown,” Ms Dunne said with a large degree of understatement.

THE ACT Election Commission estimates that as many as four in five people will cast their vote before polling day on October 17. Pre-polling opens on September 28. Time we saw some policies.

THE government seems to have put the optimistic cart before the horse with the announcement of a light-rail stop for the new Woden interchange. Building’s starting mid next year ahead of the tram feasibility study, costings or federal government clearances.

MY snout in darkest Downer reports dismay at receiving a Liberal candidate’s flyer in which a commitment was made to “ensure that everyone in Downer lives within 10 minutes of well-maintained green space, now and in the future”.

She writes: “Given how existing and potential green spaces for non-sport community use and respite by residents of all ages and levels of mobility is disappearing or left neglected in parts of the inner north, it is not surprising that electioneering flyers for Kurrajong are read carefully and with suspicion by some jittery voters”. 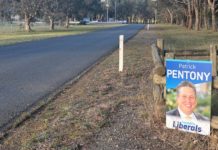