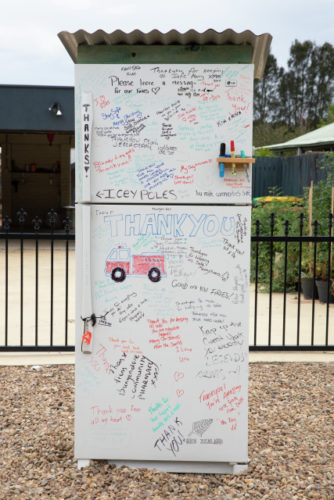 THE arrival of a fridge has inspired the National Museum of Australia to call on the public to share any stories that honour front line emergency workers following a period of unprecedented fires.

The iconic fridge, decorated with “thanks” from the community and stocked with cold drinks for firefighters on the side of a Bungendore road, was delivered to the museum this morning (February 21) in a large convoy of NSW and ACT RFS and SES vehicles, and now the museum wants to work with Australians to document stories and imagery that came from the fires.

“The arrival of the ‘Bungendore firies fridge’, which was stocked with cold drinks on the side of the road for thirsty firefighters battling blazes in the region, is a timely and symbolic instigator for the conversations we’d like to encourage,” says National Museum director Dr Mathew Trinca.

“The fridge exemplifies the kindness and community spirit synonymous with Australians facing difficult times – we’re so pleased to accept it into the national collection.”

Starting with the story of Bungendore residents Scott and Claire Hooper, who set the fridge up by the main road outside their home, to ensure passing fire fighters did not go thirsty, the museum hopes to receive more just as inspiring.

The museum has launched a digital initiative to provide a national platform for storytelling and is inviting Australians, who wish to share their experiences and pictures from the fires and to honour Rural Fire Service and other emergency service personnel, to join a National Museum Facebook group titles “Fridge Door Fire Stories”.

Mr Trinca says as a custodian of Australia’s history and cultural heritage, the museum is committed to recording the stories of the fires that have redefined the way Australians consider climatic change and bushfire threats, and to honour the emergency service heroes who worked so hard to protect lives and property.

“It’s incumbent on the Museum to both make a material record of these fires but also help people across the country tell their stories of what has transpired and how they were affected,” he says.

“The story of this bushfire catastrophe is still being written but our memories and recollections of this summer will resound for many years to come – for many reasons it will come to be seen as a defining moment in the nation’s record of this time.

“As keepers of the nation’s stories, the National Museum will be here to actively listen over the coming months and participate in the recording of stories for the nation, to honour emergency service heroes and to collect objects and imagery related to these events.

“We invite Australians who wish to share their experiences to join our new Facebook group where you can share stories, images and videos to form part of our national collective memory.”

CityNews - March 29, 2020
0
THE ACT remains free of community transmission despite the number of confirmed cases of COVID-19 rising to 77 with six new cases revealed this afternoon.

The stupid toilet-roll shortage rolls on