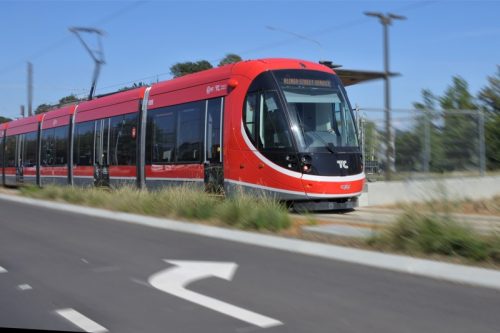 THE ACT Greens say they’re committed to getting the light rail over the bridge and into Woden, and when it’s built they want an express option, too.

However, a construction date has not been confirmed for 2B of the light rail by the ACT government, and now in caretaker period, ACT Labor is yet to formally commit to the construction of 2B in the next term.

They have committed to more than $300 million for Stage 2A, from Civic to Commonwealth Park, and about $250-$300 million to build the new CIT campus and public transport interchange in Woden.

Outside of that, Labor says the design development and approvals for Stage 2B, which will see the light rail extended from Commonwealth Park to Woden, is expected to take about 18 months.

“An exact date for Stage 2 has not been set yet, and is in the process of federal government assessment processes, such as the EPBC referral (Environment Protection and Biodiversity Conservation Act, for heritage purposes),” says ACT Greens transport spokesperson and candidate for Murrumbidgee, Emma Davidson.

“The Greens are committed to light rail Stage 2 to Woden [and] when it gets built, we want it to have an express option.”

The Greens say their proposed city to Woden express would make light rail the fastest transport option along this route, almost halving transit time, however, they did not respond to a question from “CityNews” asking how much having an express option will cost.

They say the express service would cut about 10 minutes off the estimated 25-30 minutes of the current proposal, allowing people to either travel directly from Woden to the city, or use the all-stops service.

“We would hope that the express service could achieve around a 16-17 minute journey,” Emma says.