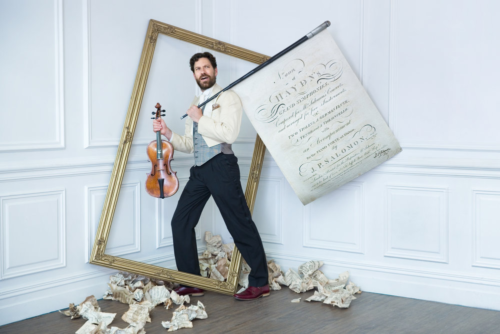 THE Australian Haydn Ensemble is a Sydney-based group that specialises in the music of the late Baroque and early Classical periods, mostly the music of Haydn, Mozart and their contemporaries. Depending on the repertoire the group expands and contracts in size as required.

For this first concert of 2020 the ensemble was stripped back to a string quartet, with the addition of flute player Melissa Farrow for two of the four works performed. The quartet was the Australian Haydn Ensemble director Skye McIntosh, violinist Matthew Greco, viola player James Eccles and cellist Anton Baba. Greco and Eccles are regular members of the ensemble while Baba is a welcome addition to the quartet.

The opening work of the concert was a Flute Quintet Op 19 No 6 Las Perejas (The Couples) written by the Italian composer Luigi Boccherini in 1774. He was working in Spain at the time, in the service of a member of the Spanish royal family and this piece is a descriptive work around the idea of a horse race. Spanish horse racing at the time was done in pairs of horses, hence the title. The opening movement announces the arrival of the competitors while the second movement describes the race in a sprightly 6/8 rhythm before a brief return to the introduction. The superb tone and pitch of Farrow’s flute blended seamlessly with the string quartet.

The second work was Haydn’s Emperor Quartet, no 72 in C major Op 76 No 3, written following a return to Austria after working in London and inspired by God Save the King. The stately melody of the second movement became the Austrian national anthem for over a century and is now the German anthem with a change of words. A near faultless performance, though the tuning of the viola seemed to be suffering from the Canberra weather.

The second half of the concert began with another string quartet, No21 in D major, The First Prussian, by Mozart. Another delightful performance, if a little uneven at times, but in other sections it sounded as though there was but a single instrument on stage as the sound blended together.

The final piece was an arrangement by Johann Salomon of Haydn’s Symphony No 100 in G major The Military. Haydn’s original score would have been for perhaps 20 musicians, but these clever arrangements by Salomon, who was Haydn’s London concert promoter and publisher, work well with the quintet. The ensemble preformed another of these compactions a couple of years ago with the addition of a fortepiano in a performance that was equally as entertaining.  The Australian Haydn Ensemble has four more concert tours for this year. They are to be eagerly anticipated.