FOLLOWING the release of electric scooters across the ACT more than a month ago, Canberra’s top road cop Marcus Boorman is now warning that “idiots on e-scooters” will be fined.

Detective inspector road policing Marcus Boorman says there’s a number of rules in relation to e-scooters including a maximum speed of 15km/h on footpath, and people aren’t allowed to use them under the influence of alcohol or drugs. 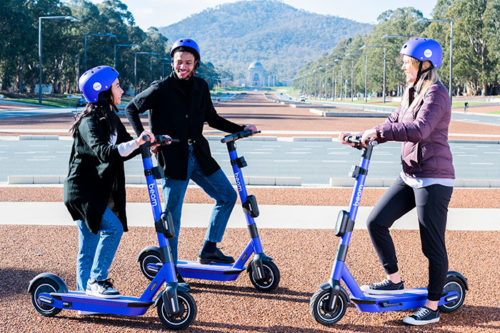 “You are [also] obliged to stay to the left and slow down when passing people,” he says.

“We don’t like to see them on the road, the only time they can be ridden on the road is when there isn’t a footpath next to the road or it’s impractical.”

Mr Boorman says these warnings haven’t been sparked by bad behaviour, saying they want to be proactive considering it’s a new mode of transport, but does highlight some complaints from Canberrans.

“There was one just this morning where I was advised by a gentleman that said he was struck by someone on a footpath when he left a restaurant,” he says.

“When you’re riding these e-scooters, apply some common sense. We will be paying attention to the activities of people on e-scooters and educating them appropriately. If anyone thinks they can get on these things and undertake risky behaviour and be an idiot, there will be consequences and there’s a number of fines that we will give out.”

CityNews - November 25, 2020
0
Parts of the ACT government website and the Legislative Assembly website are currently down, with no word of when they'll be running normally again.