As we gently mused about the merits of masks as Victoria lurched from one ghastly covid record to the next, the chief health officer is letting us loose on gaming machines, saunas and brothels. It’s “Seven Days” with IAN MEIKLE.

WOOLIES would like us to, but ACT Health isn’t recommending we wear face masks for shopping or much else at the moment.

“At this stage Canberra has no cases and no evidence of community transmission of COVID-19 and, therefore, there is no current recommendation to wear face masks in the ACT,” is the argument.

But don’t get too comfortable. Chief Minister Andrew Barr is advising Canberrans to be ready for a time when the chief health officer may recommend wearing face masks in the ACT.

“The most effective actions continue to be physical distancing, good hand hygiene and staying at home if you are unwell and getting tested for any COVID-19 symptoms,” the Chief Minister says.

“A further sensible precaution is to avoid crowds. We all have a responsibility to reduce crowding in public areas, shops and queues.”

So it seemed a bit unexpected to also get the news from ACT chief health officer Kerryn Coleman that the casino and gaming in clubs are good to go again, as is food-court dining, steam-based services such as saunas, steam rooms and bathhouses, and strip clubs and escort agencies.

“These changes will see us move to stage 3.1 of Canberra’s recovery plan,” she says, with an optimism that possibly belies the public mood.

“The government has done little more than re-announce the ‘commitment’ it made two years ago to build an extra 200 units of public housing over five years,” he writes in a comment on citynews.com.au

“The newly announced ‘nation-leading investment’ will now extend that to 260 units (and we can be sure they will be units and not houses) over six years.”

“To provide further perspective on just how ‘minimal’ the impact of this risible announcement is, the population of the ACT will, over the six years that the mooted housing is dribbling out at 43.3 houses a year, increase by around 8000 people a year or by 50,000 people in total.

WHAT’s happening at Access Canberra? Apart from mine and a couple of other readers’ recent weird experiences comes this diarised horror show from my Campbell snout, a mature gentleman, trying to renew a driver’s licence due to expire on June 10.

May 15: Reminder letter from Access Canberra (AC) advising the need for the medical certificate validating health and happiness and the ability to drive.

May 20: Complying medical certificate posted to AC and received May 22.

June 15: Very efficient letter from AC, dated June 11, advising suspension of licence. Yikes, I’ve been driving unlicensed for five days! Urgent call to AC, who said they would investigate and call me back today. No-one called.

Sought a written explanation from AC as to why this occurred via their complaints email system.

A FUNNY moment on my radio interview show “CityNews Sunday Roast” (10am-noon, 2CC) with fertility expert and obstetrician Prof Steve Robson poised to speak on air after an ad break when the dulcet tones of the Three Rivers Pest Control owner preceded him with the promise: “You breed them, we kill them”. 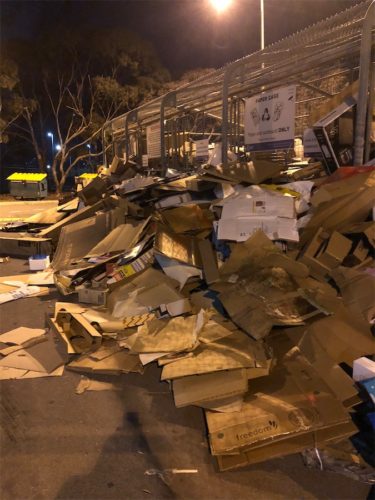 ONE of my southern snouts went to recycle a couple of boxes at her local recycling centre only to discover, she says, that Tuggeranong residents don’t seem to get the concept of the cage.

CONSUMER-behaviour researchers Toluna surveyed 1091 Australians and evoked these headlines: with cash payments frowned upon for hygiene reasons, 62 per cent of respondents now use digital or card payments for every purchase, where possible. Although many expect a rise in remote working, 43 per cent of respondents said they’d be happy to, and even want to, return to their workplaces; 11 per cent said they want to return but don’t feel it’s safe yet. Only 13 per cent stated they didn’t want to return at all.

A NEW study (for a blind company) into the most common sleeping habits of Australians has revealed the average respondent polled manages just five hours sleep a night, with “lying on stomachs” the most common position (53 per cent). Furthermore, of the 2000 respondents, 48 per cent typically go to bed after midnight, 30 per cent between 10pm-11pm and 15 per cent before 10pm. Just 15 per cent wear pyjamas, with 42 per cent opting to sleep naked. Heaven knows what the other 43 per cent go to bed in.

AND there’s a covid silver lining for plastic surgeons with noted Sydney practitioner Dr Eddy Dona saying we’re in the grip of a national boob-job boom. “Women are using super and drawing on savings to undertake ‘self-enhancement’ surgery during COVID,” he says.

CityNews - September 25, 2020
0
After the Bureau of Meteorology predicted a week of storms, the ACT Emergency Services Agency (ESA) is urging Canberrans to prepare their homes for storms before heading off for school holidays.