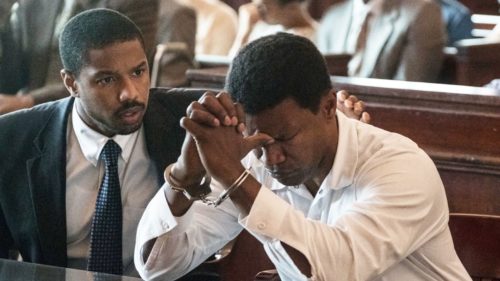 THIS is straight-forward telling of an actual story, based on a book written by the central character.

You might feel cautious about the risk of its becoming a self-praising paean. But on viewing its dramatising of a corner of the American legal process, you are likely, as were some people who spoke with me after the screening, to come away impressed by its merits and accepting of its authenticity.

The film’s foundation is Bryan Stevenson’s account of the legal battle he fought on behalf of black man Walter McMillian on death row in Alabama after a court found him guilty of murdering a young white woman.

In the film, Jamie Foxx plays McMillian. It’s a solid performance. So, too, is Michael B Jordan’s portrayal of Stevenson, a black Harvard Law School graduate who, together with Eva Ansley (Brie Larson) established the Equal Justice Initiative that has so fiercely opposed the racial prejudice that still pervades some of the former Confederate States.

The title “Just Mercy” neatly summarises the film’s two dominant themes. Its depiction of prejudice among police, jurors and judges in early 1990s Alabama is terrifying yet credible. Its plea for mercy is subtle, exemplified in a powerful portrayal of a possibly innocent man about to be electrocuted after decades on death row. The perverse panoply of execution is revolting, terrible, profound in its message.

Writer/director Destin Daniel Cretton deftly manages each sequence in the film in delivering its message, verity uglamourised by dramatic excess. His actors rise to the occasion. The effect of their combined efforts is memorable.

CityNews - October 19, 2020
0
A pedestrian was struck twice by a car in a Kambah carpark during an alleged disagreement on Friday (October 16) afternoon.

Dr Smith calls for gambling subsidies to go to Sleepbus