A 26-year-old man is facing the ACT Magistrates’ Court charged with nine offences including several relating to stolen cars in Greenway. 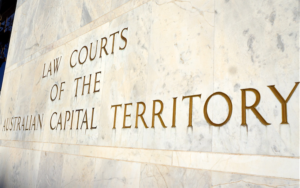 Police will allege that on Tuesday morning (March 10) the man assaulted the owner of a car in Cowlishaw Street, Greenway, and threatened the owner with a knife before fleeing with stolen property.

A short time later, police allege he attempted to steal a motor vehicle from a car park on Howell Street, Greenway, but was disturbed by the vehicle’s owner.

Police will further allege that on the same morning the man stole a motor vehicle from a house in Eileen Good Street, Greenway.

The man was caught by police driving the vehicle he had allegedly stolen at about 2am on Wednesday (March 11).

Anyone with information should call 1800 333000, or via the Crime Stoppers ACT website.